Stage 3 was 63km from Marmande to Agen, almost all along the the canal, including traversing the Garonne River on an aqueduct, so it is all almost entirely flat. 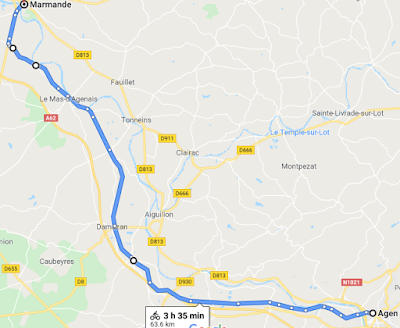 Marmande is a few km from the canal but after that you stay with it all the way to Agen where the canal passes through the town centre after crossing the river on an aqueduct.
On crossing the bridge over the Garonne back out of Marmande, you join a serviceable cycle path which runs all the way down the D933 until you rejoin the canal. The roadside cycle path is partly segregated from the road, in other parts just a lane divided by paint, and at the road junction and roundabout just outside the town it deviates from the road to pass through underpasses directly across the roundabout. It's not an especially nice stretch due to passing traffic but safe enough.
Once back on the towpath, the 2m wide tarmac path resumes, flat, reasonably well surfaced and drained as before. Much of the way it is heavily shaded by plane trees but there are some gaps in the cover where the trees are either smaller and affording less shade, or not there at all. There are one or two short stretches where the path gives way to a minor road running parallel to the canal, but these are very quiet.
After roughly 9 km, you reach Le Mas d'Agenais which is a boat marina and a base for one of the canal boat hire companies. "Le Boat". There is a picnic area, and the little village, which is just over the bridge on the other side of the canal from the cycle path, has a couple of small shops. At this point the Garonne river runs right next to the canal, but is quite a lot downhill from it.
The next village is Damazan, just a few hundred metres up the hill from the canal, where there is a bar, a restaurant and a small grocery shop. A few km beyond that you come to Buzet sur Baise, with its own wine appellation for reds, whites and rosés. (Buzet is apparently the origin of the English terms boozy, and booze, arising from British troops stationed there during WW1). This is also a base for a canal cruiser hire company (Nicols, which has bases on the Canal du Midi as well).
What is more in evidence here than vines is large apple orchards, with the trees trained in rows. The apples were not, fortunately, Golden Delicious, but a slightly firmer texture and sharper taste.
The path continues in similar vein towards Agen. Approaching Agen it climbs to several metres above the canal water level but the canal itself then climbs through a series of locks which lift it to the level of the aqueduct by which it crosses the Garonne river. Passing the sequence of locks immediately before the aqueduct, a distance of a few hundred metres, the tarmac surface disappears and is replaced by a stony chippings surface.
Crossing the aqueduct itself on a bike is not for the faint-hearted - I personally would have chosen to walk my bike across, even if I hadn't been compelled to by a flat tyre just as I reached the locks. The paths either side of the canal as it crosses the aqueduct are narrow, no more than about 1.5 metres each side. There are walkers and other cyclists to negotiate as you cross, and there is no guardrail to prevent you falling in the canal so I'd say attempting to cycle across is quite risky. It would also have been a bumpy ride, as the path surface is composed of large pebbles embedded in cement.
The canal passes through the heart of Agen so from here it is a few hundred metres at most to the town centre and shops, bars, hotels etc. Fortunately there were several bike shops, and the first I visited was able to supply a new Marathon Plus 16" tyre to replace the one on my Brompton which had failed (not punctured) and the mechanic knew enough about 6 speed Bromptons to be able to remove and replace the rear wheel.
Agen itself is a small town but it feels bigger than its population might suggest so, for example at 35k population it is about the same size as Farnham, which is near me, but the town centre felt much bigger, the size of Guildford, pop 130k. Of course, France has about three times the geographical area of the UK for a similar population, and the big cities of Toulouse and Bordeaux are rather further away (and rather smaller) than London is to Farnham/Guildford, but the difference is noticeable.
Agen itself is apparently famous for its plums, which are dried as prunes and marketed as pruneaux d'Agen. I'm not aware though that I saw any plum trees on my route.
Some geotagged snaps can be found here.
Posted by Paul M at 08:00