From Grisolles, you can follow the canal towpath (27km, about 25m climb) all the way to the centre of Toulouse where the Canal de Garonne has its source, a short feeder canal from the Garonne river, and meets the Canal du Midi which heads out east from the city towards the Mediterranean. From there it is a short ride to points of interest in the centre.
With a total distance to the heart of the old city of around 32km on substantially flat paths, I expect to have most of the day to explore the city. 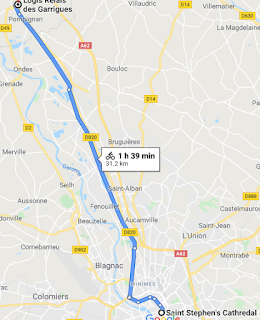 The towpath continues, as before, flat, about 2 metres wide, reasonable well maintained tarmac, and traffic-free. The landscape is now becoming noticeably more urban as you come into the greater Toulouse area. There are factories and industrial parks, and the railway line, on the eastern side of the canal, but the sense of tranquillity remains on the western side where the towpath runs. The route is substantially a straight line now all the way into Toulouse.
Shortly before reaching the centre you pass underneath an autoroute, and some 300 metres later the towpath appears to come to an end at Écluse No 1, de Lalande. Normally you just ride straight past the locks but here there are clear signs "No unauthorised entry" and it looks fenced off at the other end. You appear to have two choices - turn right and follow a small road to rejoin the path on the west side of the canal about a kilometre further down, or turn left, cross the bridge and then turn right down a small side street which brings you after 100 metres or so back on to the towpath on the eastern side of the canal. I took the right, and it was a mistake - while the road/path were fine and rideable, they ran right along the edge of a very busy autoroute so were noisy and polluted. I could see the towpath across the canal, and most people using that. After a further 500 metres I was able to cross a bridge to rejoin the main path on the other side, and with the canal between me and the autoroute it was a more pleasant ride.
This ends in a small residential street alongside the canal which emerges soon after at the Ponts Jumeaux, which is where the Garonne canal ends, and joins the beginning of the Canal du Midi. Here you are about a kilometre away, via the Canal de Brienne, from The Capitole city centre and Université de Toulouse 1 Capitole, the first of Toulouse's three universities, founded after the crusade against the Cathars in around 1229. Alongside the Canal de Brienne, whose primary purpose is to feed water from the Garonne river into the Garonne canal, are quite the most impressive trees I have ever seen - planes which I would guess are 80-100ft tall. We have a mature, 400 year old oak in our garden, which is barely half the height of these. I'm not sure my attached snap (which features a small van for scale) really does them justice.
Toulouse is known as the "Pink City" (La Ville Rose) because its architecture is predominantly of terra cotta brick, with some stone detailing. It is well served for cycle paths of variable quality, mainly alongside city streets. Getting into the centre doesn't appear to be too tricky.
Geotagged snaps here.
Posted by Paul M at 08:08