In its responses to the consultations on the East-West and North-South cycle superhighways which are due to meet at Blackfriars Bridge, the City of London cited two principal concerns.


The first of these, adverse implications for pedestrians in the City, I have commented on elsewhere.  In short, instead of focussing on the entirely new pedestrian crossings aligned parallel to the N-S route where it crosses Fleet St and Ludgate Hill (where currently pedestrians just have to chance their arm – or their leg –crossing without any form of pedestrian priority), or the restored crossing at the foot of New Bridge Street near the Black Friar pub (whose removal a few years ago elicited not even one squeak of protest from the City) or even the proposed entirely new crossing on the other bank of the Thames, at Stamford Street, where thousands of city workers walking from waterloo currently have to run the gauntlet of fast and heavy traffic without any form of priority or protection, The City instead quibbles about a 20 second increase in waiting time for pedestrians at one or two crossings.  If they really had their constituents’ interests at heart, don’t you think they would have attended to those other concerns before now?


The second is the suggestion that the space given over to the cycle paths and so, partly, taken from moving motor traffic will increase congestion and so journey times.  It is of course not the City’s fault that TfL has failed to provide any modelling data on what would happen to congestion and journey times as a result of transference of journeys from car/taxi to bicycle, or indeed to simple traffic evaporation (a well known consequence of reducing road capacity).  TfL has simply modelled as though traffic volumes do not change.


However, how sincere is the City’s concern about traffic congestion?  They must surely then be very opposed to anything which takes away road space from motor vehicles and so exacerbates congestion on their streets?  Don’t you think?


Take a look at this square of the City immediately around my office building, between Shoe Lane and Fetter Lane, Fleet Street and Holborn. 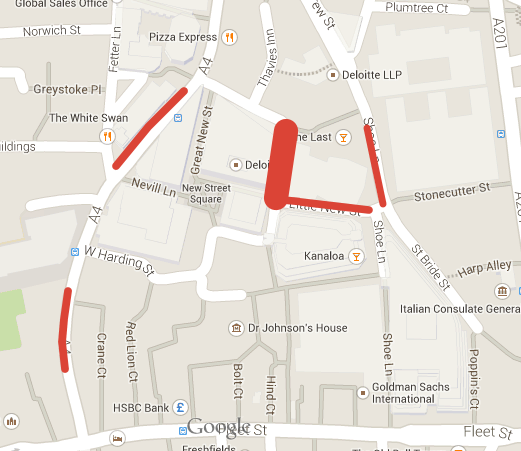 I have crudely drawn in red lines to indicate road space which has been expropriated, with the City’s consent, to the exclusive use of private property developers.

One short stretch has been closed across its entire width, leaving only the footway passable.  This stretch is being used as the loading/unloading area for materials entering or leaving the site of Land Securities’ new development at One New Street Square, the former site of the International Press Centre.  I suppose I should be grateful – rumours are afoot that this building, once completed, will be occupied by my firm, so allowing us to escape from the 70s multi-storey-car-park monstrosity we occupy today.

Forming a corner with this, half of the available width of Little New Street has been expropriated, also for Land Securities, to site their plant – generators and the like.

And just around the next corner, in Shoe Lane, another stretch of the road has been expropriated over half of its width, same reasons.

A stone’s throw away, in New Fetter Lane, there are two similar expropriations, each of about half the road width, adjacent to a new luxury apartment block nearing completion, and a little further north adjacent to the redevelopment of Number 20 New Fetter Lane.

What do all of these have I common?  They are private uses of public amenity land.  They extend the area on which a private developer can operate to build a privately owned development.  They therefore permit the developer to make more profits by permitting development of the entire footplate of the site and/or to facilitate construction operations there.

Now, I am not going to make a value judgement about whether there is public benefit to be gained from these private arrangements – for example more profits might mean more taxation on the developer and more square footage of development might mean higher business rates for the Exchequer – but I don’t think anyone, not even Canary Wharf, is denying the manifest public benefit of protected cycle paths into central London.

So why are they so critical of the perceived congestion outcomes of the cycleways but apparently perfectly happy to accept similar implications from private developments?