I suspect that you probably couldn’t go far wrong touring rural Iceland without maps. The country is very sparsely populated and most of the terrain is rough and mountainous, much of it semi-desert, so the road network is also fairly sparse. This pdf leaflet, in English, describes the road network in 2017. It tells us that there is only 12,901 km of road in the entire country, and only 4,416 of those are the “Primary” roads which you would travel between towns and villages, which are almost entirely on, or within a few kilometres of, the coast. It would be difficult to get lost on such a road network.


The main reason why you might want maps is to have tourist information. There is quite a range of maps available, notably from Stanfords, but like almost everything else about Iceland, they are expensive. They also have a reputation for being printed on thin, poor-quality paper – perhaps OK sitting in a car but useless out in the wind and rain on a bicycle. My daughter bought one and it was falling apart after a few days spread out on the sitting room floor for planning.


You can in any case get all the information you need for free on the internet.


The starting point would be this cyclists’ map, updated in 2016, downloadable from cyclingiceland.is. It can also be obtained on paper from cycle shops in country.  Information about roads includes: paved (red/pink) or gravel (grey); daily traffic volumes, distances km between marks; summit heights between marks; sectors with gradient 6-10% or >10% and which way is uphill. It also shows services available at settlements, location of cycling support services, and bus stops outside settlements. I’m going to print off the area I need and laminate it, and also store the pdf on my iPad.


A lot of useful information can also be gleaned from Google Maps – most hotels, hostels, guesthouses, restaurants and tourist attractions can be seen at large enough scale, or searched. While parts of Iceland have 4G mobile coverage, most has only 3G and some is only 2G so maps on the go are going to be difficult, but an alternative is to download the country map from maps.me onto a phone or iPad. Then the map is stored and can be followed by the GPS.

I used google maps in Chrome browser to use the Walking Directions feature (cycling directions doesn’t seem to work for Iceland) to get point-to-point distances with an altitude profile and max height, total climbed and total descended. It doesn’t quite tally with the topo maps on highest point on route, but they are close.
A good source of topographical mapping is available at opentopomap.org, part of openstreetmap. I printed to pdf, to store on my iPad, about six pages at a scale of about 166k, which has contour lines at 10m intervals.

It doesn’t have much tourist information, but it does show campsites, and the detail increases as you increase the scale.


For tourism information, about campsites/hostels, where to eat and drink or buy groceries etc, and sights of interest, each region has its own website: east.is covers the east, northiceland.is covers the north etc. They have links to local websites such as http://en.visitfjardabyggd.is/ covering the principal eastern fjords.


Finally Google streetview gives useful clues about the state of the road, its surface, gradients etc, if you drop pins regularly along a road. I find instantstreetview.com works best for this. You can also create rather crude animations from streetview with utilities such as http://www.tripgeo.com/Directionsmap.aspx and watch them play out, in rather slow motion, if you have nothing better to do!
Posted by Paul M at 08:38 5 comments:

A folding touring bike?
The Birdy, by German firm Riese & Muller, is a full-suspension folding bike. It has no fold in the frame, which apparently, rather than the small wheels as I had always thought, is what contributes most to the mechanical inefficiency of most folding bikes.  Instead, the rear frame triangle pivots under just as it does in the Brompton, and the front wheel similarly pivots under and back below the top tube. It is this fold style, and the bulkier folded package, which led me quickly to abandon the Birdy as a daily multi-modal commuting bike and buy another Brompton, but I have to admit that it has much longer legs than the Brompton when it is unfolded. 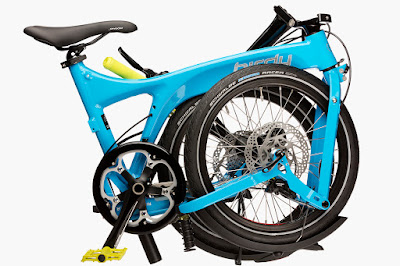 The wheels are a slightly unusual 18”, 40-355, a smidge larger than the 16” on a Brompton. My technical reading on the efficiency of small wheels, slightly surprisingly, informed me that they are actually more efficient than larger ones.
Both front and rear wheels have suspension, but I would still distrust them on stony or potholed roads so sticking to well-paved roads (as most of Iceland’s coastal routes are) seems sensible. Anyone who has ridden a Brompton or Birdy however will also be aware of how sensitive their steering is compared with full-sized bikes – the wobble while climbing steeper gradients is quite noticeable.


But, the coastal routes are relatively flat, with only occasional gradients above 6%, and I think the only one to exceed 10% is my second day, over the 700m Oddsskarð  pass to Neskaupstadur. I think I will be getting off and pushing for a fair proportion of the 7km to the pass, especially on the 3km of gravel road at the top, and I'll be carrying spare brake blocks, in case I wear out a set on the descent. The return leg back to Reydarfjordur will be at low level, through the new, 7.6km long, Nordfjordur Tunnel.


Certainly a fair bit of googling produced forum threads cautiously endorsing the Birdy as a touring bike, as long as you weren’t planning a lot of off road or exotic locations where the unusual sized tyres could be difficult to find. The R-M webpage on the Birdy pitches it as a tourer, and they supply a folding rear rack and a “Lowrider” bolt-on for the front fork to hold rear and front panniers.
The big advantage though, if you aren’t planning a wild transcontinental trek, is that it packs down into a cordura bag the size of a large duffel, which when not in use folds up into a small backpack. This makes it more practical to transport on flights (as regular hold baggage) or on regular bus services. While the principal bus operators in Iceland all carry standard bicycles, some make a hefty charge for them and there is always the risk that you won’t be able to get your bike on if the allotted space is already full. I want the reassurance of being able to call it a day and finish my day’s segment in comfort if I get too tired.


In terms of touring accessories, I got Ortlieb Cityroller front and rear panniers, as my daughter’s experience this year tells me waterproofing is important. I'm going in mid-June, Iceland’s driest month of the year, which overall is still drier than where I live in Surrey, but I gather that the weather is always changeable and unpredictable, with almost every month having about 20 days with some rain (or snow)fall, and most of the rain seems to fall as drizzle which is the wettest kind.


In the bags or on top of the rack I will have an ultralight one man tent, a down sleeping bag certified to 3oC comfort (max daytime temps in June average 10oC and night-time temps average 5-6oC), an inflatable mat and pillow, and specialised travel clothes, mainly Rohan. I’ve weighed everything, and it adds up to 28kg, of which 13kg for the bike with racks, 1.25kg for the bike bag and 13.5kg for everything else. For transport the bike bag will have two of the panniers, a pair of shoes and some soft stuff like fleeces etc to cushion the protruding bits of the frame, and anything which might not get past airport security in hand baggage. I can go up to 20kg maximum, as the regional flight from Reykjavik to Egilsstadir is indifferent to the dimensions of the bag, but very firm on weight limit. As they also impose a 6kg limit on hand baggage I’ll just have to stuff my phone, iPad, chargers etc in my coat pockets and hope they don’t weigh me too!