So, the Pre-Cambrian cretins on the City of London’s Court of Common Council have overruled their Pplanning & Transportation Committee’s decision to support the closure of Tudor Street at its junction with New Bridge Street.


The decision apparently follows fierce lobbying by senior figures in the Inner Temple, including Baroness Butler-Sloss. Their logic?  Apparently it interferes with deliveries to Temple and would prevent film crews accessing the area for filming, which would deprive the Temple of some revenues.


So, what access, apart from the eastern end, is available to vehicles wishing to go to or deliver in Tudor Street? 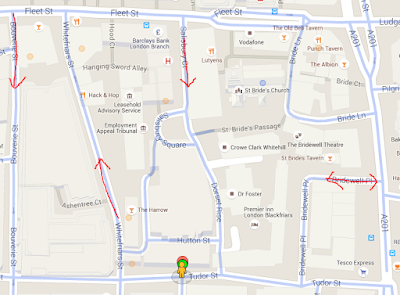 
The streets to the south, towards Embankment, are largely filtered now and I understand that TfL wants Temple Avenue to be filtered too.


How do these access points work out, for large commercial vehicles – you know, like film crew trucks?
Yes, parking bays and a taxi stand already constrict access fairly tightly, as this photo I took this lunchtime demonstrates – the eastbound HGV mounting the pavement to make space for a westbound HGV to pass through the narrow gap. I didn’t photograph it, but I also noted that in Whitefriars Street the no parking, no loading “At Any Time” markings were being constantly and routinely flouted, further obstructing the passage of vehicles.


And when a large vehicle – you know, a film crew’s truck – gets to the end of Tudor Street where the gate into Temple can be found?  Well, this is what they will find.


A bit like the Needle’s Eye in Jerusalem which apparently gave us the famous Biblical quote about camels.


So what is the fuss really about?  Yes, this: 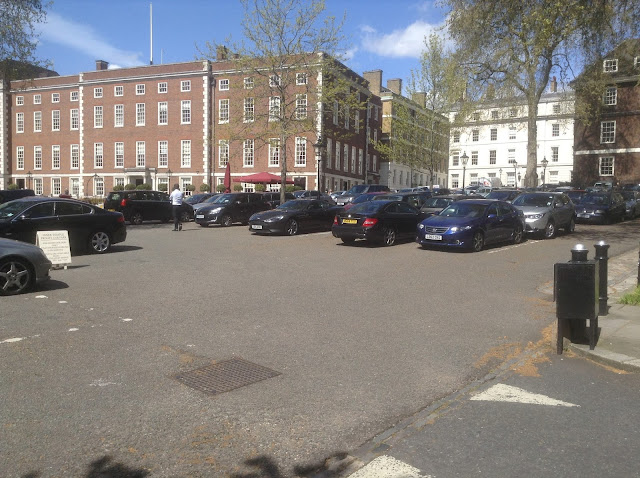 Yes, there may be some notable senior QCs who have not yet lost the use of their legs, but apparently not many.

I recall reading somewhere – probably graphics on tweets – that the nationwide average distribution of car trip lengths is: 25% are under a mile, 50% under 3 miles, 66% are under 5 miles.  The average car trip overall is 11 miles. (Those short trip percentages for inner cities broadly translate miles into kilometres – so 2/3rds of inner-urban car trips are under 5km/3 miles. I haven’t seen a value for inner-city average trip length but I would guess rather less than 11 km)


I’ll make some crude assumptions: all those trips under 1 mile are exactly 1 mile, etc. These would flatter the results below but the point is substantially the same.


On these assumptions, shorter car trips which account for 2/3rd of all trips actually only account for 15% (or less) of all car mileage driven, because of the effect of a small proportion of much longer trips. So if all shorter trips were walked or cycled instead, this would make hardly a dent in the overall use that a typical car owner made of his or her car, in mileage terms at least. That might well explain why the world’s most active cycling nation, the Netherlands, has a very similar level of car ownership to the UK or other western European states, and (as far as I can tell) wears them out over about the same number of years. The fact is, they drive almost as much as we do.


But they walk/cycle circa 40% of short trips, compared with about 2% here.


It is not the total miles driven that determines traffic congestion – and I would guess that the relationship to emissions/pollution is far from linear – because longer trips must generally be on more open roads.  (Unscientifically, it “stands to reason, innit” that no sane person would crawl along at walking pace beyond a certain limit before they decided that it isn’t worth the candle.  Although the concept really belongs to daily commutes, there is a kind of “Marchetti Wall” effect that determines travel distances in terms of how long people can tolerate. Purely anecdotally, having been a small child before any of the modern motorways were even built, I can recall that the arrival of the M1 and the M6, even when they were shorter and less continuous than they are today, incentivised my parents to pay far more frequent visits to my grandparents in Sheffield and Ambleside respectively. But I digress.)


What determines congestion is the number of trips occurring in one place at the same time.  For example, it is not the long-distance road hauliers, travelling round the M25 from one motorway to another, say the M2 to the M1 or the M4, which create the congestion on the M25 at peak hours.  The M25 was in principle built for them and for other long distance drivers but, apparently to the complete surprise of the government’s traffic planners, who clearly have no understanding of the concept of induced demand, it brought about huge numbers of trips which join and leave the M25 within 2 junctions – purely local trips, probably more than 5 miles but quite possibly less than the average 11. Trips which perhaps, to some extent, were previously made on local roads – oh, how I remember hacking (in the back of my dad’s car) through Ascot, Bagshot etc before the M25 was built – but to a greater extent simply weren’t made at all. Or trips generated by the ribbon-development which road building brings about, and which largely explains the enthusiasm of some local (landowning) supporters of schemes like the Norwich Northern Relief Road.


But, as a message, incentivising walking and cycling does not mean, for most of the target audience, giving up their beloved cars or even actually reducing their use all that much. It represents minimal threat to the interests of the motor manufacturers, who must surely be behind most of the lobbying both for road building and widening and, in a subtle “don’t you think it is too dangerous without helmet and high-vis?” way, against cycling. They have motorways in the Netherlands. They call them Autowegs there.  They generally have smoother, quieter, more expensive surfacing than our motorways and are in better condition. Their maximum speed limit, at 130kph, is fully 10 mph faster than ours. And they don’t even have, comparatively, so much of an automotive industry to believe their economy can’t manage without.


So what is it that our politicians, notably Zac Goldsmith and Sadiq Khan, are so afraid of?
Posted by Paul M at 09:27 No comments: