From Moissac you stay on the canal towpath all the way to Montech (about 24km, virtually flat with about 13m gentle climb at the end), where the Canal de Garonne meets the Canal de Montech, which takes traffic down to the Tarn River. Then follow the Montech towpath to the edge of Montauban (12km, about 20m descent) and a short stretch on urban road to finish. About 35-36km morning ride, leaving time to have lunch in Montauban and do some sightseeing. 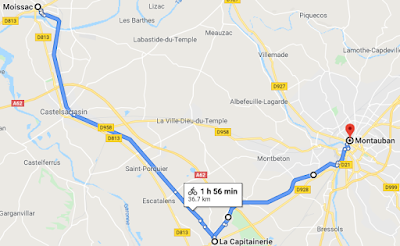 After lunch, retrace your steps up the Canal de Montech (12km, climb that 20m again) to rejoin the Canal de Garonne towpath to Grisolles (17km, about 10m climb). 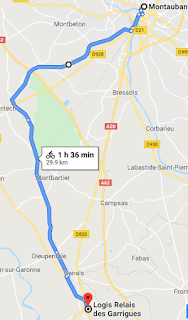 About a kilometre along the towpath out of Moissac you come to another aqueduct, the Pont-Canal du Cacor, which carries the canal over the Tarn river. It is about 300 metres long and like the Agen aqueduct it does not lend itself to cycling across, due to the narrowness of the path, lack of protection against falling in the canal, pedestrians and other cyclists to navigate - and a bumpy pebbled surface.
Once across, the tarmac surface resumes and continues to Montech,, a small town and marina for the canal, where a branch canal, the Canal de Montech, takes water traffic down to Montauban and to a lock which reconnects with the Tarn river.
En route, you pass a curiosity, the Pente d'Eau de Montech mechanical boat lift. This was designed to bypass a succession of three locks and presumably it was hoped it would increase the speed and capacity of the canal system at that point. In essence, a barge enters a form of bathtub of water at the bottom of the slope, and powerful engines on tracks then haul the tub of water, with boat, to the top of the slope where the tub opens and the boat can sail out. Or vice versa. It doesn't look like the Pente d'Eau has been used any time recently, but there is clearly a project in train to make a museum of it.
At Montech itself, to access the Canal de Montech cycle path to Montauban you need to continue a couple of hundred metres past the junction to go up to the road bridge to cross the canal (it is quite busy but there is a cycle path on the sidewalk) and then double back on the other side of the canal. It is then 12 km of gently descending canal to a port/marina just before the final lock which descends back into the Tarn River. Here, you cross the canal and head out of the port area, keeping an eye out for a sign for the Véloroute pointing right at an underpass below the railway tracks, with extremely limited headroom. At 182cm tall myself, I had to bow my head slightly to get through. From there you take separated cycle tracks along the road which bring you first to a modern road bridge, and then to the old bridge, Pont Vieux, where you cross into the town centre.
Montauban is an imposing, slightly gothic, town built, like Toulouse, mainly in red brick.
You can then return up the Canal de Montech to rejoin the Garonne canal at Montech towards Toulouse. I stopped over about 30km short of Toulouse, in Grisolles right by the canal, so I would have a short sector into the city the following morning and the rest of the day to explore.
Geotagged snaps here.
Posted by Paul M at 08:05