Stage 2 is 41km from Sauveterre de Guyenne to Marmande, the first 14km undulating and descending on country lanes to La Réole on the banks of the Garonne river, then a flat run  to reach the canal towpath at Fontet, followed by about 15km along the canal, and finally across the Garonne flood plain for about 5km to Marmande town itself. 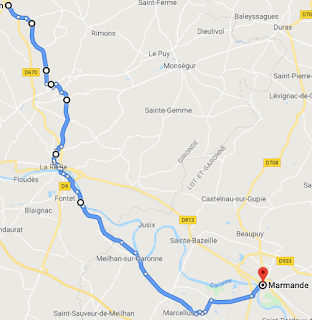 After perhaps a kilometre of busy road leaving Sauveterre de Guyenne you turn left on to a much quieter country lane, designated a "voie partagée" with bike signs towards La Réole. The road is quiet, though not traffic-free – watch out in particular for agricultural vehicles which seem to be able to move quite fast – and the terrain is moderately undulating. My assessment though is that the maximum gradient is probably no more than 5-7% and within the capabilities of the gearing on my Brompton. About half-way through the 15km to La Réole you pass a splendid old watermill, the Moulin de Loubens.

As you approach La Réole you can join a busy road or you can cross this and follow a quiet back road which brings you into the northern side of the town instead of taking you direct to the bridge over the Garonne river. The town has a few bars and cafés, notably one overlooking the river close to the bridge, from which it is a short gentle climb up a street which connects directly to take you across the bridge.

On crossing the bridge, you follow a moderately busy local road for about a kilometre before reaching a junction with a much busier bypass road, which you cross to access the quieter road which leads down to Fontet, where you meet the canal. For the next 20km or so you are on the canal towpath, which alternates from one side of the canal to the other from time to time – you can’t miss the changes because you see that the path in front of you is no longer asphalt, and usually there is a sign to indicate that you need to cross the bridge

To access Marmande town you need to leave the towpath and follow local country lanes for about 5km across a flat alluvial plain. You will see evidence of sand/gravel extraction by Lafarge all around you. There is about a km of slightly busier road before you come to a junction where you can join a separated cycle lane for most of the way into town, apart from over the bridge across the Garonne river just before entering the town.

Marmande is a modest town with hotels, bars and restaurants and small grocery shops. I didn’t see any evidence of a camp site but again you can wild camp discreetly beside the canal if you wish. It styles itself "La Ville des Tomates" but I didn't see any tomatoes on my route. It has its own wine appellation, Côtes du Marmandais

The towpath is a prepared tarmac surface, in fact for its entire length to Toulouse which is well over 150km. It is in pretty good condition overall, although in a few places the top dressing is crumbling and the surface becomes a little rougher. I saw no signs of potholes, though, and drainage seems pretty good with no puddles of any size on the path. It is about 2 metres wide, which for the traffic seemed adequate, and it is of course substantially flat, as it follows the water. The level rises in steps with each lock but in this area the locks are well spaced and rise perhaps 1.5-2 metres a time. The path does however vary in height above the water surface, between about 50cm and perhaps 2-3 metres, so there is a very slight undulation.

The path is also heavily shaded along its entire length in this area by tall mature plane trees on either side – planted originally by the constructors of the canal, to provide protection from the summer sun for the commercial barges plying it. This does mean some tree root disturbance creating mini speed bumps which were slightly uncomfortable on a Brompton, but generally they were easy to spot, often easy to steer around, and I wasn’t in any hurry.

Like the Roger Lapébie cycle path, there are very few benches or picnic tables to stop for a rest en route, and no water fountains to refill your bottle, although down in the shade of the trees that becomes a less pressing imperative.

The path is exclusively for walkers and cyclists - there are clear signs prohibiting cars and motorcycles, with an added panel saying horse-riders are prohibited too. The only vehicles you typically see are the engineers' vans from Voies Navigables de France (VNF) and some heavy machinery maintaining the banks, eg brush cutting or doing embankment reinforcement. It seems that VNF sees no need to instal gates or barriers to discourage motor vehicles so by and large there is nothing to obstruct non-standard bikes, and indeed I saw families towing child trailers and baggage trailers, and even one tandem and one tadpole trike.

There are however occasional spots where staggered barriers have been installed, apparently to force more sporty cyclists to moderate their speed as they approach small boat marinas, picnic areas and the handful of designated waterside campsites. These might require a certain amount of manhandling to get a bike/trailer combo through.

Geotagged photos along the route can be found here.