The image below is an aerial view of the former headquarters of the Syngenta agrochemicals multinational, originally part of ICI, south of Fernhurst, between Haslemere and Midhurst in West Sussex. 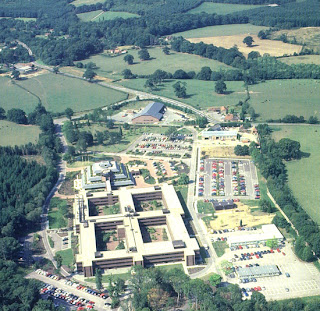 I have marked the location with a pin on the map below.
﻿

﻿
A housebuilder, Comer Homes, wants to build 245 homes and some commercial property on this site.  Earlier attempts to gain planning permission to build about 400 homes were rejected.  I don’t know how big the site is, but from the scale rule on the image I would have to say that 245 homes sounds pretty tightly packed for open countryside.
And yes, this is open countryside.  It is, quite bluntly, the middle of nowhere.  It is 4½ miles by road to the north to Haslemere for shops, supermarkets and the mainline station to Waterloo.  It is 4 miles to the south to Midhurst, a rather more modest small town with no major supermarket and no railway station.  (Great of you are a polo fan – Cowdray Park is situated here).
A little nearer, there is a gastropub, the Duke of Cumberland, a mile or so to the south in the hamlet of Henley along a single track road, no motor vehicles except for access.  A mile or so to the north in Fernhurst, another pub, a primary school and an office supplies retailer.  Just outside the site itself, the Kings Arms, a Marco Pierre White restaurant.
A keen cyclist might scoff at the distances to shops and station.  4 miles?  Pah!  Easy-peasy!  4 miles of sheer terror on fast country A road with lots of bends and brows and – natch – not a footway to be seen most of the way.  Of course, you know better than to waste your breath asking whether there is any cycle infrastructure. Save it to cool your porridge, as my mum would have said. Some quite stiff climbs too.
I’m sure you get the message – to function here will unquestionably require a car, actually probably two per household if spouse at home is not to be totally isolated.  (Comment has been passed that the development will provide too few parking spaces, unfortunately probably a fair comment in this particular case).  This won’t greatly affect congestion or pollution in the immediate area, but it will add greatly to the congestion and parking capacity problems in Haslemere, around the station.  Of course, the principal attraction of this site, and of another even bigger site  a mile or so to the south at the old King Edward VII isolation hospital (how apposite!) as housing developments, is that rail connection.  It is a matter which greatly exercises the good burghers of Haslemere and, while I don’t share the views of some residents about what to do about this, I think we are all agreed that “something must be done”.
The local paper, the Haslemere Herald, carried a front-page article on the development this week, reflecting these concerns, and some adverse comment about the developer’s alleged attempt to sneak the project in under the radar of public notice.  (The Herald provided a link to Savills website where you can download a comment form, if you are so inclined, so that little trick perhaps didn’t work.)
The housebuilder was asked for comment, and honestly, all you can say about their response is that you couldn’t make it up. 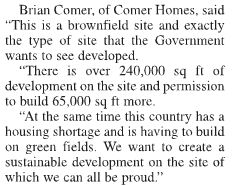 Is this site, already developed and so technically “brownfield”, really exactly the type of site the government wants developed?  Is a high-density housing estate which will be totally car-dependent really what the government has in mind as “sustainable development”?
﻿
Posted by Paul M at 11:30