My travels on Ebay

I’ve just sold my trusty old Dawes CityVision7 utility bike through Ebay.  It was surplus to requirements, now I have my shiny new Fahrrad Manufaktur s300 “ladies” bicycle to replace it. 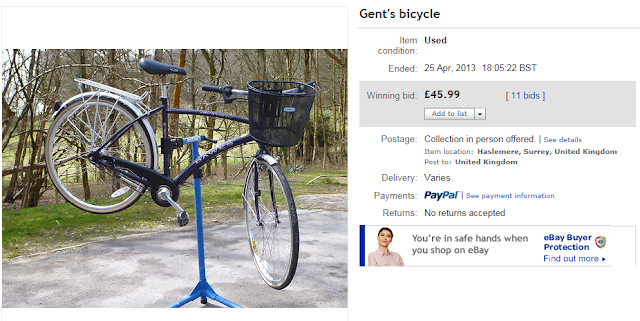 I chose the S300 because it was available in a large enough frame size for a taller-than-average (182cm) male, as a step-through frame version, and it is a modern design with a modern Shimano 8 speed transmission – essential on the not-so-gently undulating Surrey Hills.  I am not getting any younger, and while I can swing my leg around the back of a gent’s bike in normal circumstances, I was finding it a bit of a challenge when I had two large shopping baskets hung off the rack.


I have to say though that my experience of Ebay this time was disappointing.  My first foray into bike sales was two Islabikes which my kids had outgrown (my daughter now has a Pashley Penney, but to my shame and grief is much more interested in driving lessons now she has reached the age of 17).  Those, bought for £640 a few years ago and current RRP £740 (the pair), fetched £580 on Ebay!  I then got shot of a child’s 20” mountain bike for £16, and a budget child’s 24” suspension mountain bike for £35.  In both cases I was more than satisfied with the result.


So what happened this time?  A classic utility bike, not vintage, but a modernised version of the classic English Roadster, Shimano Nexus 7 hub with roller brake, mudguards, chainguard, rear rack, front basket.  Whole thing cost, many years ago, £450, equivalent new model £650 (admittedly with hub dynamo and lights which would add a good £100).  It may be 20 years old, but it is in excellent condition, hardly a scratch, little wear and tear, plenty of tread on the tyres etc.


I got £45.99.  Of course I don’t blame the buyer – he made the highest bid, and obviously I will honour it and deliver the bike as soon as the folding stuff is in my hand.  It is just that no-one bid it higher, so he didn’t need to pay any more.


But there is a distinct disconnect between its replacement cost and the realised price, compared with the other bikes I have sold which were much more in the sports/leisure mode rather than utility/transport.  I think that tells you something about the status of utility/transport cycling in this country, don’t you?


I also have a pair of vintage (1988) Bromptons – don’t ask -  which I have decided I am not going to sell, but instead keep as heirlooms for my children, for when they (quite soon) go off to university.  (I have a hankering for my daughter to study at one of those Dutch unis which teach many of their courses in English, like Amsterdam, Leiden, or Utrecht.  Apart from the continental style of multi-module degree courses, the cosmopolitan atmosphere, and the “travel broadens the mind” thing, I can get to sample Dutch cycle infrastructure.  Realistically, I guess it is more likely to be in the UK).  Certainly if I ended up with those reaching £45 on auction, I would cry for a week.
Posted by Paul M at 07:29