Why buy a Brompton?

Every working day, I set off from home, cycle the 2½ km down to the station, carry my folded Brompton onto the train, get off at Waterloo, unfold and cycle the 1½ km to my office.  Then I do the same in reverse every evening.  This way I save myself time - walking is certainly feasible but the home end would take a good half-hour, and driving/parking wouldn't rally take any less - money, and good conscience.

At a guess, I would say that three folding bikes, mainly Bromptons because they do really have the most practical fold for daily multi-modal commuting, spill out of each of the 12 carriages on arrival at Waterloo.  That’s say 35-40 of them, all heading north or east into the City or West End.


Why so many?  Much as I admire the Brompton and would happily endorse the product to all comers, you can’t pretend they are cheap.  A new one will set you back anything upwards of £800 before you have added panniers or front luggage, lights etc.  They are also, in my experience, quite maintenance-intensive – they are engineered to fine tolerances so are less forgiving of component wear or minor damage.  And they are quite a quirky ride with their 16 inch wheels – I quite like it but I could understand why some people wouldn’t.


The answer lies in the cycle policies of the rail companies, in my case South West Trains.


Firstly, cycle restrictions.  SWT’s restrictions are not well-expressed and the language in their timetables and on-line cycle policies needs to be analysed carefully to understand what you can and can’t do.  Essentially, at peak hours, where certain stations on the timetable are shown in red, bicycles cannot be embarked or disembarked.  This doesn’t mean that they can’t be carried through those stations, just that they must get on before the red stations and get off after them. 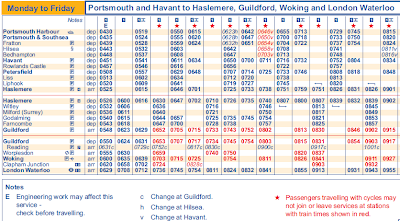 It might seem a bit bizarre that bikes can travel on, but are not permitted to join or leave trains when they are at their most congested, ie the first few stops before arrival or after departure from London, but I suppose it makes sense – that is when the access to the bike storage area is most likely to be blocked by standing passengers.


Standing passengers: there you have it - the big issue is capacity.
SWT operates two classes of train on my line, Waterloo-Portsmouth.  The “white trains”, or class 444 rolling stock which is what is intended for long-distance services, can carry 6 conventional bicycles in every five-car unit, of which there are normally two on each peak-hour service.  The storage area is specifically for bikes, with wheelstands to hold them, and restraining straps.  There are no seats in this area.


The “blue trains”, or class 450 rolling stock, have a mere 2 cycle spaces in each four-car unit, of which there are either two, or on the busiest services, three, making a total of 6 spaces per train or half what a typical white train can take.  In practical terms you can probably squeeze 3 or 4 bikes in where they say 2, but the biggest problem is that the space is also designated for pushchairs, heavy luggage – and passengers, because the area has 4 fold-down seats.  It was never supposed to be thus, but the Portsmouth line is served almost entirely by blue trains, despite the fact that they are intended for suburban, short distance use, and despite the long standing protests and representations by passenger groups and MPs representing constituencies down the line.


And you can absolutely guarantee that passengers who get there before cyclists will occupy these seats, even if there are plenty of spare seats further down the train – typically the first few carriages from the station concourse will be packed, and the two carriages furthest away will be half empty – indeed even if there are empty seats immediately next to the area, because the fold-downs are broader than the three-across alternative permanent seating.


According to correspondence I had with SWT, subject to the published restrictions and the 2-cycle storage limit per unit, priority belongs to the bicycles and pushchairs, but you try asking a passenger to remove his or her bum from the fold down seat, and tensions will quickly rise.


But hey, what’s your problem?  SWT’s policy also states that there are no restrictions on the carriage of folded cycles provided that they don’t obstruct exits or passageways, a perfectly reasonable caveat on safety grounds.  This can sometimes be interpreted (incorrectly) by train staff as meaning that a foldable cycle must be folded, but on a crowded train that isn’t really that much of an imposition and it is only courteous to your fellow passengers to give up the cycle space and fold so they can sit down.  As to obstruction of doors and aisles, in practice guards very rarely make an issue of it.


But it does inevitably mean that if you want to take a bike up on the train with you, it has to be a folder.  I don't think anyone who takes a non-folder on board at Haslemere is going any further than Guildford.  The risk of being turned away from a busy train otherwise, and possibly having to wait some considerable time, is too great.  You might be OK if you get to know which platform your evening train departs from so you can be on the platform before it is announced, and if you board far enough down the line for the train still to be largely empty, but otherwise, forget it.


British trains have only a small fraction of the cycle capacity I have found on any continental rail network I have ever used.