Before the war, there used to be a railway branch line connecting Fareham with Gosport, running on around the coast to Lee on Solent.  By the time my family arrived in Lee in 1960, the railway was long gone, and the old station was now an amusement arcade, but I remember older people reminiscing about taking the train all the way to London from the Lee sea-front.


All evidence of the railway track was erased, from Lee as far round as the Forton district of Gosport, just north of the town centre.  What remained was, for a time, used as a private goods line serving the naval munitions depot at Frater, where, or so rumour had it, the nation’s nuclear arsenal was stored.  This line also fell into disuse, but remained in situ, overgrown with weeds and brambles, for a few more decades.  A part of it, from Forton to Tichborne Way, was converted into a shared use cycle and footpath. 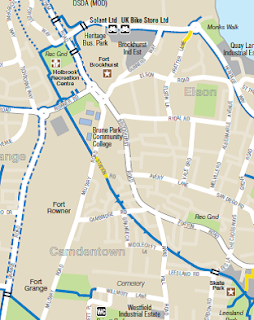 Then came an ambitious plan to build a light rail scheme connecting Gosport directly with Southampton via the main line at Fareham.  Work commenced on preparing the old line for light rail but the plan was abandoned on cost grounds during Tony Blair’s tenure of Downing Street.  However, the scheme was not entirely dead – it metamorphosed into a Bus Rapid Transit route.  (Is BRT cheaper than light rail? Possibly not if this post on US site Railway Age is anything to go by.)  This finally opened in August 2011. About five regular bus routes, with up to 30 services per hour in peak times, use the public road system as far as Tichborne Way, where they join the dedicated road (shown as a red dotted line on the plan here) which takes them to Redlands Lane, with bus-priority signals at the few junctions  en route, and then cover the final half-mile to Fareham rail station on public roads.  This permits them to avoid the gridlocked A 32 which runs parallel. 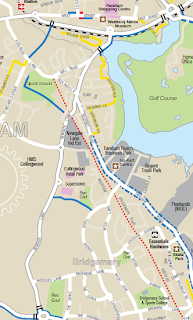 Needless to say, the scheme met with early opposition, with residents whose homes  back on to the route arguing that their lives would be blighted and wildlife would be adversely affected.  Others complained that the scheme was  a “waste of money”.  At the time the scheme finally opened, a year later than planned, it was announced that some services would be slower than they had been on the public roads, although that is entirely due to the fact that their routes now detour to take in the railway station.  There is a quite interesting resident reaction to this news:


“Bus user Darren Sellen, of Savernake Close in Gosport said the longer journey would deter him from using the new buses. The 44-year-old said: ‘I thought the new buses would be a lot faster than the ones they were replacing.


‘I don’t really want to take a detour all the way to the train station when I’m on my way to the bus station.


‘I will give the buses a go when they start to see what I think.


‘But if they take too much longer I would rather just get on my pushbike.’


Not back to the car then?


Soon after the route opened, significant passenger increases, and improved journey times, were being reported, and it was a hit with passengers - and cyclists - who are the only other users permitted on the busway (apart from emergency service vehicles).  Shame then that within days a cyclist had been seriously injured on the busway by a bus which ran into him from behind.  (It’s a shame too that the local paper expends so much printing ink banging on about the fact that the cyclist wasn’t wearing a helmet – which would surely have been a lot of use in protecting him from his  facial injuries – rather than on asking how a bus driver managed not to see a cyclist who was directly in front of him).


However, if you prefer not to share the road with buses, or if there are limits to how far you are willing to cycle, you also have the option of cycling to the route and parking your bike in the Sheffield stands supplied at each bus stop.  This combination of bus-cycle provision is not one I have so far seen anywhere else in the UK, although it is quite common on the edges of large French cities, such as Rennes, capital of Brittany.


At present the cycle parking is not very extensive, as can be seen below but who knows – if it proves to be popular enough, they could always expand it?

Apparently this is just the start.  The BRT route is due to be extended to improve its connectivity and lengthen its dedicated sections.  At the northern end, the plan is to restore the remaining, now derelict, track bed which continues all the way into Fareham Station – the green line on the Google map below.  At present there is no formal footpath or cycle path along this stretch so it is unencumbered, although no doubt the adjoining householders will kick up as they did with the first section.


View Busway in a larger map

At the southern end, apparently part  of the existing cycle path built over the remaining track bed  would be redeveloped as an extension of the busway (the cycle path is the blue and purple lines, with the purple line being the length proposed for conversion to busway). Perhaps cyclists would be sanguine about that, as they will still have access to it, although they will have to share with buses instead of with pedestrians. The loss of a pedestrian route however may be less well received if, as appears to be the case with the existing section of the route, there are no footways provided alongside between stops for pedestrian use.