After my week cycling the Eastern Fjords in Iceland a couple of years ago, I decided to look for something a little different this time.

Warmer, for a start. Also, less hilly. And without the day-long gaps between outposts of civilisation.

I started to look at the south of France. Initially, I was looking at the Vélodyssée cycle route along the Atlantic Seaboard, riding out from Bordeaux to the coast at Arcachon and then down to Biarritz, but the towns along the route didn’t look very interesting – just coastal holiday resort towns really, with little history.

Then I spotted a guidebook to cycling the towpath of the Canal Lateral de la Garonne, from Bordeaux to Toulouse. This forms the western half of the Entre Deux Mers route from Bordeaux to the Mediterranean at Sète, the Eastern half continuing from Toulouse eastwards following the Canal du Midi via Carcassonne.

I won’t be able to get away for long enough to do the entire route so I am* going to do the first part as far as Toulouse, and hopefully come back later for the second half.  I can fly into Bordeaux on a Monday morning, with my Birdie folder stowed in the hold, and out of Toulouse airport on the Saturday evening. Both airports are easily rideable to or from the city centres.

(* At the time of writing, this is just a dream - the Corona Virus has put it on hold, certainly for the original timing of May 2020 and possibly until 2021 or later. But what do we have if we don’t have dreams?)


As in Iceland, I'll be riding this German folder, a Birdie by Reise & Müller. It doesn’t fold as easily or as compact as a Brompton, but it is longer-legged, full suspension, works pretty well as a tourer with panniers and folds fairly neatly into its own cordura duffel. 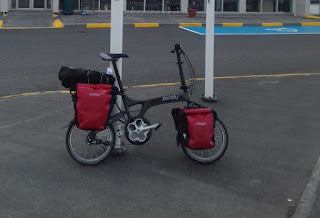 Update: so, some little sods stole the Birdy out of my garage. They forced their way through our security gates, thus damaging the electric mechanism, took the bike but nothing else - I guess it is easy because it could be wheeled silently, and of the 8 bikes in the garage they were smart enough to identify the one with most value (RRP new about £2.5k) - apart from the gate remote from the car so they could walk out of an open gate. First thought was “well, that’s it” but I reckon I can do it on a Brompton instead, covered in “Episode 1(a)”.

I'm splitting the route into six easy stages. Stage 1, from Bordeaux to Sauveterre de Guyenne, largely follows a tarmac cycle path known as the "Piste Cyclable Roger Lapépie" on an old railway track bed, so although not entirely flat, the gradients are shallow and the total climb and descent is a modest 250m over 65 km.

After that the route descends to meet the canal at La Reole on Day 2, from where it is substantially flat, just rising a few metres each kilometre with the canal locks. Stage 2 will end at Marmande, 3 at Agen, 4 at Moissac, 5 a little beyond Montauban, with stage 6 finishing in Toulouse city centre.

I planned the route with the aid of this book "Cycling the Canal de la Garonne" by Declan Lyons, who also wrote a similar guide on the Canal du Midi route beyond Toulouse. It provides detailed directions to find the canal path, as well as information about points of interest on the way, notably the many "Bastide towns" scattered along the principal waterways of the Dordogne & Lot region of France.

Apart from short sections in Bordeaux at the start, Toulouse at the finish, and on Day 2 between the Lapépie path at Sauveterre and the canal near La Reole, there isn’t really any wayfinding involved - just follow the paths - but for navigation I’ll use the “Geoportail” app on my phone and iPad, to get French IGN mapping, which is similar to Ordnance Survey Landranger and Explorer maps.

I'll be travelling lighter this time. For one thing I won't need as many clothes - at Midsummer in Iceland the temperatures rose to a giddy 8 Celsius (OK - I chose a bad year to go) -  but I expect better in Bordeaux, with the climate averages for May showing a daytime max around 18-20C. For another I have no plans this time to camp so won't need to carry a sleeping bag or tent. I don't want to anyway - I prefer a proper bed with a chocolate on the pillow and a turn-down service, and I only contemplated (very briefly) camping in Iceland because of the thin spread of hotel accommodation - but one slight issue with the Garonne Canal route is that there are few camp sites near to the route so some detours would be necessary, whereas small hotels and Logis are liberally sprinkled along the route in the little Bastide towns.

In addition to blogging, and tweeting, along the route I am also hoping to post photos from my phone (so not exactly art photography) onto a shared Google Photos folder. After a bit of playing around I figured out how to ensure that the geotagging gets uploaded so you can click on the i symbol for location data and a link to it on Google Maps. This way I hope if you're interested you will be able to see the quality of the route if you feel inclined to try it yourself.