Quayax (v.t.) to move or transport a kayak by bicycle.


You may by now be familiar with the new verb to “Quax” – to perform an errand, such as shopping for groceries, on a bicycle, where many people might believe it can only be done with a private car. It derives from the Auckland, NZ politician who apparently couldn’t conceive how anyone could go shopping on a bike.


I already regularly go into town and to the supermarket on my “shopper”, an omafiets-style German bike by the snappily-named VSF Fahhrad Manufaktur (which I think means something like German Cycling Federation Bicycle Makers). It’s a mile and a half away and the time penalty of cycling instead of driving is more than recovered through not having to search for a place to park, walk over to the ticket dispenser, walk back to the car etc. Plus I save £1 in parking charges. Traditional quaxing.


Now, I thought, when I’m on holiday, could I transport my kayak behind my bike?  The beach is only perhaps 10 minutes walk from our house but dragging the kayak on its trolley is a bit tedious, and car-topping it is completely unjustified, quite apart from the difficulties of parking the car by the beach in high season.


So, could I tow it behind my bike?  In principle, I suppose I could just tie the end of the kayak to the back of the bike and pull it on its trolley but a typical kayak trolley has a fairly narrow wheelbase, and if you take a turn at any speed it would topple.

I looked online for bike-towed kayak trolleys and I found a couple but they were eye-wateringly expensive. One guy in British Columbia could sell you one for about C$700, plus another C$150 to ship it here, but that is almost the cost of the kayak itself.


So, I set to work figuring out how to make one myself.  The task was simplified by the fact that the kayak is the “sit-on-top” variety – instead of sitting inside the hull, you sit on a fully-sealed polythene shell, which has “scupper holes” to allow water to drain out from the seat well. The trolleys use the scupper holes to support and hold the kayak, using alloy tubes poking up vertically through them. Three metres of assorted 25mm alloy tube, some tube connectors as used to assemble clothes railings for shops, and a pair of trolley wheels later, and I had my raw materials.


One metre of a thick-walled tube forms the axle, with holes drilled at either end to hold R-clips, which keep the wheels in place. The kayak is 75cm wide so the 1 m wheelbase provides adequate stability to keep the centre of gravity between the wheels. 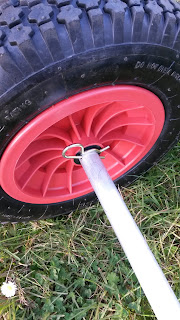 Two metres of a thinner walled tube form upright bars and a framework to support the kayak above the level of the wheels, all held together with T-section or five-way chromed steel tube connectors. 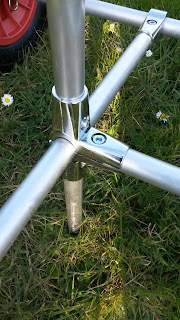 Finally, a small hole in the stern post of the kayak, provided to take the hinge pin of a rudder, makes the tow hitch. A 6mm drop-nosed pin, as sold in any good marine chandlers, acts as a tow hook, through a hole in a piece of 2x1 timber battening attached to the rear pannier, to position the hitch point behind the back of the rear wheel. 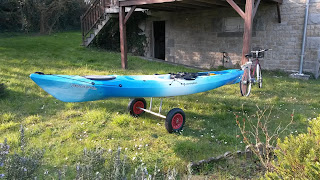 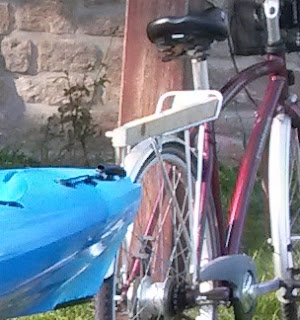