Each time I drive past this used car sales company – this is not somewhere that you would ever choose to walk or cycle to, being just off a slip-road to the A3 south of Guildford – I am struck by the advertising banner in front of it. 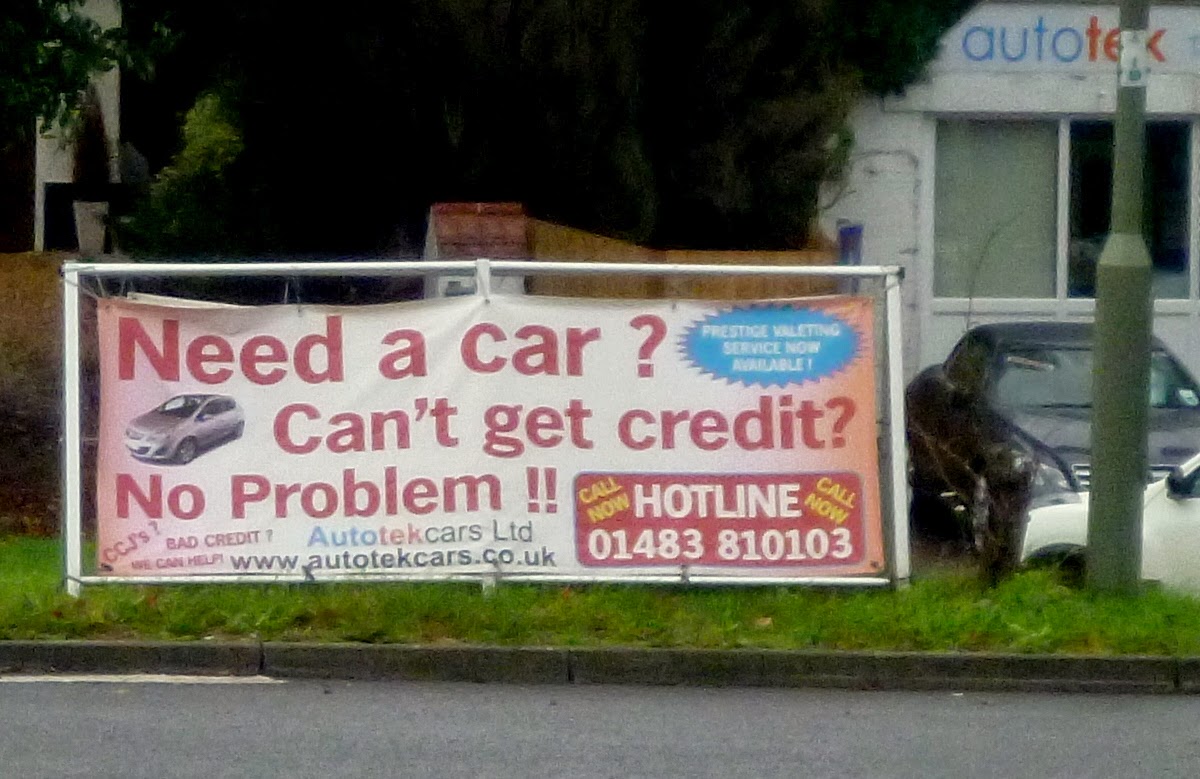 Well, actually, it is a problem, and quite a serious one.


In the central boroughs of London, according to the 2012 census, barely a third of households have access to a car.  This is true of the wealthiest boroughs, Westminster, and the Royal Borough of Kensington & Chelsea, as well as less affluent boroughs such as Camden, Islington, Hackney and Southwark, so carlessness is not simply a question of affordability, it is also a question of choice.  Indeed I once knew a partner at a US law firm’s London office, quite probably collecting a seven-figure salary, who told me that she didn’t have a car because (a) it would be a pain to find secure parking for it where she lived just off the King’s Road and (b) she didn't need one - she used taxis around town and hired a car if she needed one for longer trips.


It certainly makes sense.  In city centres, distances between home and work, shops, schools and leisure facilities are generally quite short.  More than half of all car trips are less than 3 miles, compared with 5 miles for the nation as a whole, and public transport is widespread and frequent, even late at night.  Many short trips can more easily be walked, or cycled if they are slightly longer.


I imagine other city centre districts are similar.


Out in the borough of Waverley, where I took this picture, things are however quite different. 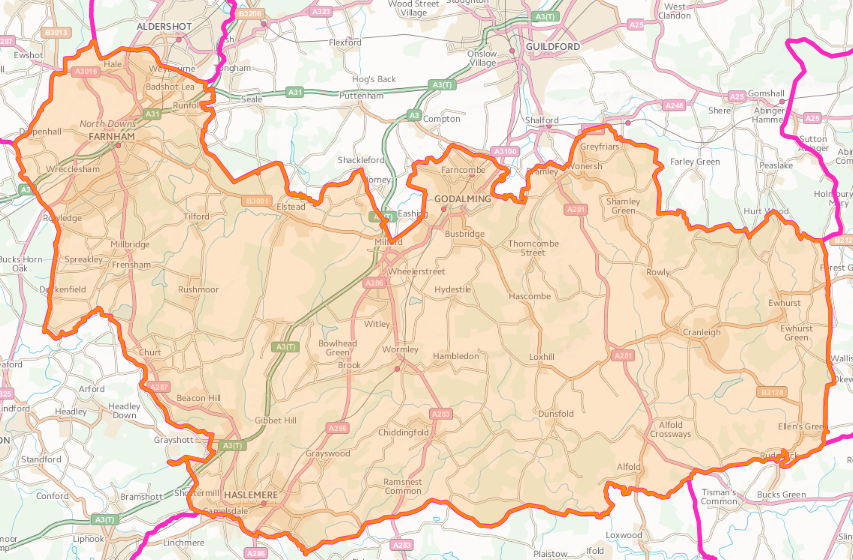 Waverley is a largely rural area.  It contains four small towns – two of which might be described by some as large villages – all of which are nearing 10 miles apart from each other.  In between there are smaller villages, where you might find a pub and a church and - if you are lucky – a Spar and a chi-chi farm shop.  In one of those Sunday Times surveys a couple of years ago, Waverley was voted as the local authority area with the best quality of life in England – although I suppose that depends on how you define quality of life.  It is certainly one of the most affluent outside a few central London boroughs.


This extraordinarily high incidence of car ownership no doubt goes a long way to explain why our bus services are so poor – expensive, unreliable and infrequent.  Without subsidies they are unsustainable.  Surrey County Council is currently consulting on plans to cut those subsidies by £2 million pa, almost 25% of their current budget.


So residents have relatively long distances to travel to work or to shop.  Schools, in theory, should involve shorter distances but in practice there is still an element of gamesmanship by parents seeking the “best” schools for their children, even if they are some distance away, which in turn displaces the children of less pushy, or less savvy, parents to the less desirable schools some miles in the opposite direction.  The secondary schools have bus services, free for those who live far enough away, but not free for many others including those living just inside three miles distance.


The topography is relatively hilly, being in the Surrey Weald, and despite what some campaigners may think there certainly is a level of incline beyond which only true enthusiasts will continue to cycle.  The roads are also unsafe, both in subjective and objective terms.  KSI statistics show us that rural roads are far more dangerous than urban streets, and Surrey has the unenviable reputation for being one of the more dangerous Shire Counties.


(The County Council defends itself by claiming that pedestrian/cyclist deaths are not the highest when measured per billion vehicle miles, as opposed to per head of population, but that is the sort of discredited claim once made by Mike Penning to assert that Dutch cyclists were in more danger than British ones.  From the pedestrian/cyclist's point of view, surely what matters is how much risk I personally face from traffic, regardless of how much of it there is?)


So, it can hardly be a surprise that nearly 90% of households have a car, nor that this is not entirely down to people who choose to have a car, who want to have a car.  Just as we discovered when we started to establish local food banks (our local mayor at the time didn’t think there would be any call for one in Haslemere) that there is none so poor as a poor person surrounded by rich people, there is none so afflicted by transport poverty as someone who cannot afford to be without a car, but simultaneously cannot really afford to have one.  People have to forgo holidays or treats – or worse – to feed the gluttonous monster.  Otherwise they are trapped in a Catch-22:  without a car you can't travel to a job.  Without a job you can't pay for a car.


It is not all doom and gloom though.  Haslemere Vision, the community interest company established to conduct  consultation and a referendum on a local plan under the Localism Act, polled all residents and produced what to me was a slightly surprising finding – a significant majority of residents feel that they are too dependent on their cars, and would like to see measures which reduced that dependency, through improved walking and cycling facilities, traffic calming and the introduction of 20mph speed limits on key stretches of road in the town centre.  They would also like to call a halt on the apparently infinitely elastic response to increasing demand for parking spaces near the railway station, for London commuters who choose to move to homes in places whence travel by car is inevitable. A year earlier, the good townspeople of Haslemere decided not to return, as usual, a Tory county councillor, choosing instead an independent, a local mum with a background as a sustainable transport adviser to the European Commission and an interest in cycle facilities and safe routes to schools.


Not all opposition has been overcome – we have in Surrey County Council one of the last true dinosaurs on road danger reduction and the introduction of 20mph limits, whose cabinet member for transport is a convicted drunk driver, and of course there are dissident voices citing statistics of dubious provenance and/or taken out of context.  On the other hand, the town council has gone along with at least the 20mph campaign, even though I suspect they have had a purely Galilean conversion.  “Eppur si muove a 30 miglia a’l’ora” they might mutter under their breaths.


Bicycles are not, I’m afraid, the entire solution to our local problem.  They could certainly cover truly local journeys, within the towns and out to satellite villages within two or three miles, and locally we are looking at how residents in Hindhead and Grayshott could safely access Haslemere for shops, schools  and railway station, but suitable infrastructure between towns is still a distant prospect.  The main roads are too dangerous (subjectively and objectively), the distances are too great, and the contours are too steep.

One thing which could make a material difference to cycling uptake would be growth in the market for e-bikes.  That could solve problems for older users, for hilly terrain, and for the distances.  We “just” need to make it safe enough.