We had our department Off-site last week.  After the obligatory morning session on “Strategy” (yawn) we repaired to the Lee Valley White Water Centre, at Waltham Cross, for a barbecue and team-building activities.

LVWWC was built for the 2012 Olympics and is now open to clubs and the public for white-water kayaking and rafting.  In essence it is simply a humungous swimming pool, in which water is pumped by tremendously high-volume pumps into a high-level pool, from where it cascades down a long winding channel into a low level pool, from which you ride back up, in your raft, to the high level pool on a kind of travelator, and start the descent all over again.  The channel is set with all sorts of soft-ish plastic blocks to create the effect of river rapids and white water.  Provided you follow the advice and ensure that, if you fall in, you float on your back with your feet facing downstream, you won’t come to any harm, and you’ll be swept by the current towards sets of steps where the monitoring staff will fish you out again.

Most of us opted for white water rafting, while some opted instead for a raft-building competition, using big plastic drums, poles and rope.  I can certainly recommend white-water rafting by the way, as a team building exercise.  It was also tremendous fun – as long as you (a) don’t mind the occasional swim, (b) are not of an excessively nervous disposition, and (c) aren’t self-conscious about being seen in a wet-suit.  (Only the positively anorexic could not look fat in a wetsuit.  I am sure the staff sized me up and picked the size with extra gussets). 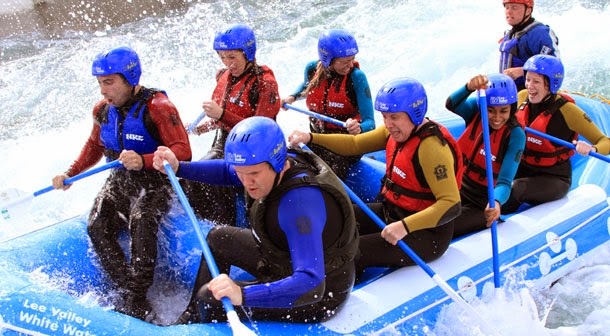 Our group was 45 people, ranging in age from 23-year-old graduate recruits through to one 59-year-old senior partner, but in our pyramidal structure I would say that half were in their twenties and a third in their thirties.  There were 18 women, 27 men.  That is a fairly representative mix for a London Big Four accounting firm, or indeed most City institutions really.

12 of the ladies, and only one gent, opted for raft building, which was entirely dry – the rafts had to be tested in competition against each other at the end, but the wet-siders did that, one team of partners against another team of graduate recruits.  The partners won – not, I hasten to add, because the juniors thought it politic to let us win, rather because our raft, while appearing at first sight to be the flimsier, actually held together for the paddle out and around the green buoy and back, while the other team ended up swimming along pushing the pieces of theirs before them.

There was, apparently some grumbling about the choice of activity from the ladies.  Many did not want to get wet or have to get themselves together again in their finery for the evening’s entertainment, making cocktails at the Rebecca Hossack Gallery.

This was evidently not a consideration which troubled the men.  It would be easy to fall into sexism here, so apologies if you think that is what I have done, but our female staff are generally more careful of their appearance, dress and grooming than our male.  I might add that it would be no bad thing if the men upped their game on grooming and dress – accountancy is still quite a traditional profession and clients tend to have more confidence in well turned-out staff.  It’s not that our men don’t wear suit and tie – they do – it’s just that they all too frequently look like they have slept in it.

Will I ever get to the point?  Well, looking around that 60/40 split of male and female staff, I recognised a sizeable number of men who come to work by bicycle.  Only one (plus one other who was on holiday at the time) do I know among the women who does the same.

I understand that one factor, if perhaps not the most significant, is the perception that cycling to work has an adverse impact on grooming and dress.  Having to change out of lycra, applying the slap in the ladies’ at work, and getting “helmet hair”.  As I say, not something which much troubles the men, although perhaps it should.

Is this a fair argument against cycling?  Who am I to say it is not?  In any case, it is not hard to see why people would think that, when they look at the cycling environment we face every day.  Probably a more pressing concern is that people (not just women) often don’t feel safe on the roads.  I know that the statistics suggest that this is not the case, that cycling is less dangerous than, say, tennis or golf, but that is not how it feels, especially when the strategy adopted by our government to encourage people to cycle, and to assure them that it is safe, is to say “wear a helmet and high vis”, and to push the Franklin tome on cycling - “Cyclecraft” - with its exhortations to keep safe by matching the speed of motor traffic, occupying the slap-bang centre of the traffic lane, and keeping a high cadence so that you can quickly achieve “sprint speed” at roundabouts.

But who says it has to be that way?  Can we not cycle in ordinary clothes, business attire even, if we ride the right type of bicycle?  Instead of getting up like a fluorescent canary and riding “choppers” (bikes cut down to the bare essentials, removing weight-adding stuff like fairings and mudguards), can’t we ride practical machines which protect our clothes, including, if you like, your Shalwar Kameez, as mentioned in that excellent feature in the Birmingham Post the other day?  Of course we can, but you would have to be super-fit to do that Franklin-style and not find your business suit wringing wet by the time you reach the office.  Most people would prefer to proceed rather more sedately, in gentlemanly or lady-like fashion.  For that, we need proper infrastructure.  Not blue paint or broken white lines, but concrete, kerbs and medians, and bollards and planters, to keep us apart from the danger which we either avoid altogether by not cycling, or adapt to by cycling like prats.

In that Birmingham Post article, Councillor Deirdre Alden, who made the remarks which provoked this response, has clearly still not “got it”.  She still thinks cycling discriminates in favour of young white men.  She still confuses cause with effect.  I doubt she is by any means alone in having such misconceptions, so how to convince her, and her ilk?

All the more reason for pushing hard and fast for the Mayor of London’s proposals for a North-South and an East-West segregated cycle superhighway.  This is, you might say, the canary of mass, inclusive cycling, not just in London, but eventually around the country.  If it dies, it tells us that the mine is toxic to humans too.
Posted by Paul M at 05:31