Out of town, or out to lunch?

I was reading a Twitter conversation yesterday, a series of exchanges between a lady called Frances Coppola (I assume no relation to Francis Ford Coppola, the film director, but you never know) and various tweeps with a cycling frame of mind.


Ms Coppola is no doubt a thoughtful and amusing person in many respects but I thought her observations on out-of-town shopping centres vs traditional town centres were just plain silly.  Here is a taste: 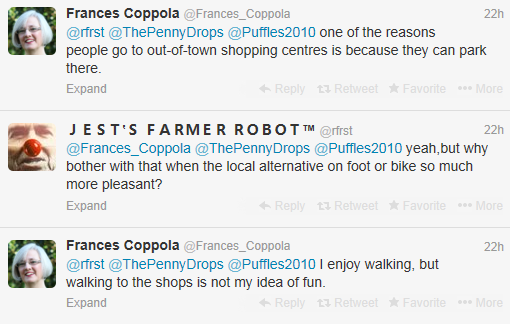 Elsewhere in her timeline she comments that people like shpopping malls because they are “easy” to  park.


Easy?  Thinking about the two Westfields – Stratford and Shepherds’ Bush – and Bluewater, what springs to mind is either basement carparks under the buildings or vast flat sheets of tarmac outside.  The former are deeply uninviting places – dark and under-lit, with loads of blind corners and pillars for muggers – real or imagined/feared – to hid behind.  They are also huge, and confusing.  You could easily get lost in them, or at least have difficulty in returing to your car unless you have left a breadcrumb trail to follow back.  Unless you are an early-bird, chances are you will have to park at some distance to the pedestrian exit and access to the shops, because the early arrivals – human nature being what it is - will have snaffled all the spaces close to the exit.  You will in all probability have a longer walk from car to shops than you would have to suffer in your local town centre.


And in the  open-air examples, you may not have the fear of footpads, but you still have the confusion about where you parked you car – ever parked in Gatwick South long-stay? – the long walk to and fro, plus exposure to the elements, is no better than in your town centre.


And parking is not the only issue, as this tweet from TfLtrafficnews shows us: 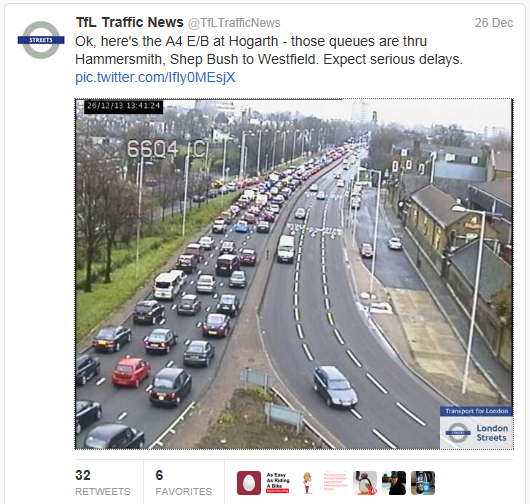 No, people don’t go to Westfield because it is easy to park, or if they do, they have a screw loose.  All that is easy about it is that you will likely not be disappointed about finding a space – somewhere.  The lady referred to last year in one of Mark Treasure’s Aseasyasriding blog posts, writing to the local paper in Horsham complaining about the £1.20 per hour parking charges there, which motivated her to drive to BlueWater – a round trip of a good 100 miles and thus probably nearly ten litres of petrol at a cost of about £13 – may have been miffed about having to pay for parking, but that cannot have been her true motivation for going to BlueWater.
As that loyal hound of the Founder, Spokesman and only member of “Drivers Union” succinctly tweets:

People go to shopping malls (out of town or in town) not because of the ease of parking, or at least only partly so.  They go because the shops they want are there – mainly multiples because independent retailers could never afford the rents – and the shops they want are there because the developer has created an environment which customers want to be in and so attracts business.  That environment is frequently sheltered from weather, and it is clean and fairly secure thanks to an army of private security personnel, but mostly it is entirely pedestrian – you may have to drive some distance and for some extended time on congested streets but once you are there, it is traffic-free.  Far too few town centres are that lucky.  Mine certainly isn’t.
Posted by Paul M at 02:45