A helicopter saved my life

Before anyone starts, yes, I know, it should be “An helicopter saved..”


This morning, Evening Standard Columnist Ross Lydall tweeted this, with a link to the story: 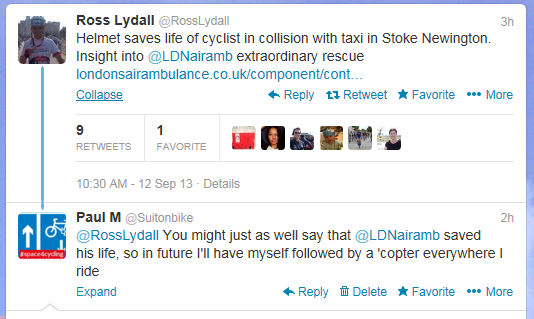 I have included my rather flippant reply – the air ambulance may well have saved his life just as much as the helmet, so I think from now on I will arrange to have a chopper hover along behind me whenever I am out and about on my bike.


Seriously though, you should take a look at the story on the London Air Ambulance website.  Whether you regard helicopter emergency services as a cost-effective health offering or not, there is no question that the pilots and doctors who work for it are brave, dedicated and conscientious people, and in any case most of the cost is funded by public voluntary donations.
But look at the story.

I think it is entirely possible that Chrishan’s life was saved by his helmet – it does happen, from time to time, even if it is far less significant a factor than some people would have you believe.  What is far more interesting, and significant, though is why he needed a helmet to save his life in the first place.

(The Twitter timeline suggests that Ross Lydall is going to look into whether the cab driver was prosecuted for dangerous driving.)

Update - Ross has reported the incident in the Evening Standard and it does seem that the police are "considering" a prosecution of the minicab (sic) driver - although not until the new year which is nine months after the event!


When you open the webpage, you see summaries of another four case histories down the right hand margin.  Two of these involve falls, from a ladder and at school, but the other two also involve pedestrians run over by cars. 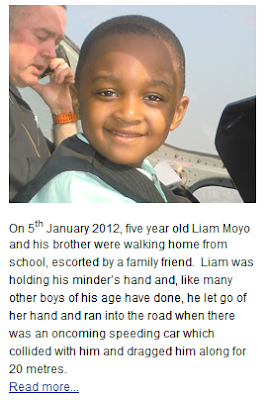 A speeding car
Then this 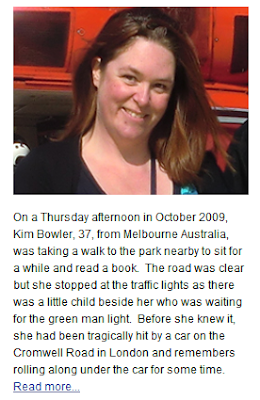 “Tragically hit by a car”.  Tragic indeed for Ms Bowler, who has suffered grieviously and has had a long and difficult rehabilitation.  The account on the Air Ambulance website however is a little vague about the circumstances of Ms Bowler’s misfortune.

So I did a little more digging, and came up with this from the Huffington Post. 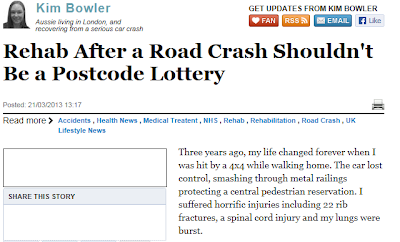 “The car lost control, smashing through railings protecting a central pedestrian reservation”.  (Now, I could quibble with Ms Bowler’s analysis of this event – surely it was the driver who lost control, not the car, but this is her story, in her words, and she is the one who has suffered for it).

The rest of her article talks about her experiences with an underfunded health system letting her down with her rehabilitation, but she did at least manage to get help privately, paid for from an interim settlement by the driver’s insurers after she appointed a firm of personal injury solicitors to pursue a claim on her behalf.

What seems reasonably clear from all three stories, one involving a cyclist, another a pedestrian and the third a child, is that their misfortunes were visited on them by drivers.  Those drivers were driving personal transport vehicles (two cars and a taxi) in central London.  In two of those cases definitely, and probably in the third, the driver was wholly or mainly to blame for the incident.

A snapshot, sure, and not representative of London road casualties as a whole, where a disproportionate number of casualties involve HGVs, but it does beg the question why, when use of a private car in a large city centre such as London is entirely unnecessary and alternatives are always available, we actually permit the use of private cars here?

And, to ram home a favourite hobby horse of mine – I really don’t give a rat’s arse whether strict liability promotes cycling, interferes with progress on better pro-cycling measures such as physical separation, or is entirely neutral.  Kids like Liam, ladies like Kim and men like Chrishan should not be compelled to prove* that negligence on the part of a motorist has caused them damage or injury for which they are entitled to compensation.  In Kim Bowler’s case it certainly looks to me like a slam dunk, but the fact is that the insurers could, perhaps did, prevaricate, obfuscate and obstruct until the bitter end to evade their responsibilities.  We need strict liability, and we need it now.

* On a balance of probabilities, in civil Tort law.