Down to Portsmouth on Saturday, for my sailing club’s annual regatta.  The club, Tudor Sailing Club, is at the north-eastern corner of Portsea Island which is what makes up most of Portsmouth City, and is very handily placed for the M27 and A3M motorways.  However, I had a small errand to run, to stick my Langstone Harbour Board annual harbour charges vignette on my boat in Southsea Marina, which is at the south eastern corner of the island.

Portsmouth is a crowded and congested city, so the 4 ½ mile drive from the motorway exit down to Southsea can easily take longer than the first 30 miles from Haslemere.  Match days at Fratton park can be even worse.  So I figured I’d try taking the train instead, as I didn’t on this occasion have anything much to carry.  It’s a journey I’ve done a few times before so I'm familiar with the route.


The fast train from Haslemere to Fratton takes 39 minutes so, allowing for cycling down to the station, and then from Fratton to Southsea, slightly above an hour, compared with 1h 20, sometimes worse, by car.  The ride at the Portsmouth end is about 50/50 on 30mph and 20mph roads – broadly speaking, all the uncoloured roads on this map are 20mph.  However it is notable that, on the whole, driving behaviour in Portsmouth is more civilised than most other places I have been, even on the 30mph roads, perhaps because Portsmouth is a relatively high-cycling city, with a long history of cycle use – of which more below.

Having peeled the backing off the sticker and stuck it on the cockpit of my boat, so I am now harbour-legal, it was time to head back to the top corner of the island and my voluntary bar duty at the club – who knew, by the way, just what hard work tending a busy bar can be?

The first part of the route simply retraces my steps, along 20mph roads to Bransbury Park.  Then a short stretch of shared cycle/footpath across the park, back onto another 20mph street.  Here, unfortunately, I got a little lost, as I didn’t have a map with me. 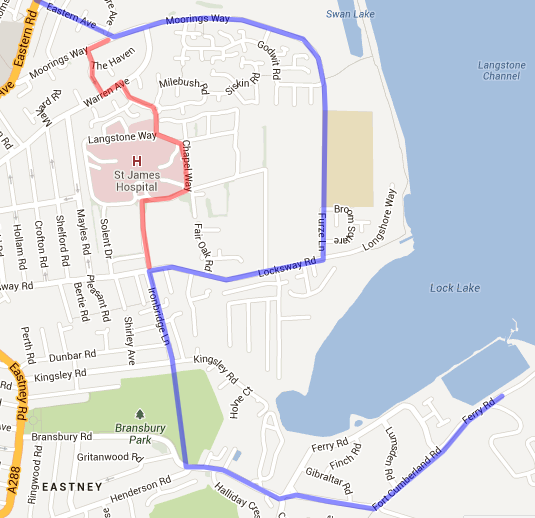 The route I had intended to take through St James Hospital (Jimmy’s, of television fame) is shown in red.  My actual route, in blue, takes something of a detour.  Without a map, and with basically nil in the way of signage, the sight which confronted me here threw me off the scent – I just assumed that the entrance to the hospital might be the only one, with no exit on the opposite side. 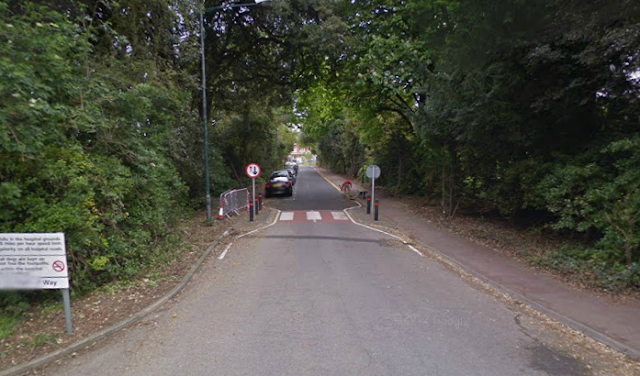 As it is, I am not sure the distance is really all that much shorter, and the route I took was by no means unpleasant, through part of the Portsmouth University campus, along a bus & bicycle-only road here.

Finally, out of the warren of residential streets, I emerge on to the Eastern Road – one of the principal routes into Portsmouth and Southsea and a busy dual-carriageway for much of its length, although again it is notable how sedate Pompey motorists tend to be. Much of this road has a 50mph limit but the traffic tends to move closer to 40 – the sequence of the traffic lights renders it futile to travel faster and the locals seem to have “got” that. 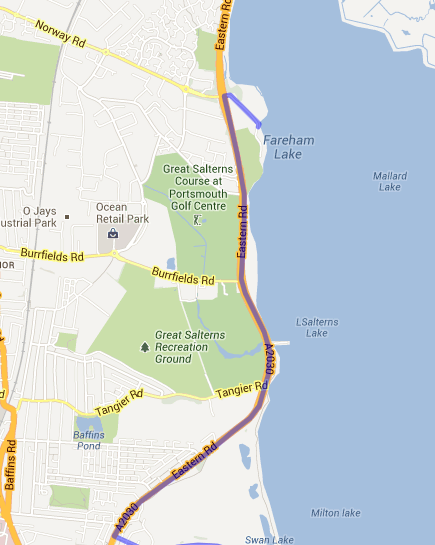 There is a shared-use foot and cycle path which runs the length of this road on the eastern side.  It is not exactly of premium quality, but serviceable for the volume of traffic it carries.  Shared use of course is never ideal, but the nature of this route is that very few pedestrians would want to use it so cyclists can proceed largely unhindered and without conflict.


Finally, duty done, time to head home.  I can pick up a London-bound train at Hilsea – only stopping services stop here, but the journey time back to Haslemere is still only about 45 minutes and adding for the rides at either end of the train journey, it is still only a little over an hour, compared with about 45 minutes by car.   For one person, a day-return ticket is slightly cheaper than the petrol burn, and in any case I have a stack of freebies which come with an annual season ticket over the years.

For this I would normally use my Brompton - in principle, on a weekend it should be possible to take my Fahrrad Manufaktur on the train but I prefer not to risk an hour's wait for the next train because the cycle storage area is already full, and South West Trains does not restrict folders.


The ride to Hilsea Station is so-so – a 30mph road but local custom (not legal as far as I can tell) is to treat the footpath alongside as shared use, and the final stretch is a proper cycle path which avoids the railway road-bridge.  There is, however, this:
﻿﻿

When the lights go green, it is not for long so you have to accelerate sharply and, going straight ahead across the junction, you have to  weave around the cars coming the opposite way and turning across your path.  There are no pedestrian crossings here either.


Now, Portsmouth is by UK standards a cycle-friendly city.  It was one of the first to introduce a city-wide 20mph limit on all residential streets, and although average speeds have not subsided below 20 they have come down.  There is a network of off-road cycle paths, mainly shared use.  The 2012 Census shows Portsmouth as one of the top areas in England & Wales for cycling modal share on commuter journeys.  The City Council estimates that 70% of its children walk to school.

I suspect also that Portsmouth’s general cycle modal share – outside of commuter hours – bears a rather more favourable comparison to the census results than most places, where cyclists only appear for a couple of hours each weekday morning and evening.  Certainly most of my trips here are at weekends, and I see quite a few cyclists with Tesco bags on their handlebars, or just going about their business.


Although I am sure that to some extent policy plays a part in Portsmouth’s cycling modal share, I should think geographical and historical factors are predominant.  On geography, this is a flat landscape, and a compact area – a statement which might annoy some bloggers but it is true.  It is easy to cycle, and the distances are ideal for cycling.  (Even in the leading cycling nations such as the Netherlands, there is a steep transition from two wheels to four beyond a certain distance, indeed in the UK the mode shift against distance is much more gradual, albeit from a much lower base). The climate is mild and relatively dry.   It is also very densely populated.  Portsmouth is a labyrinth of Victorian/Edwardian “artisan terraces” where one car per household can just about be accommodated at the expense of having only one vehicle width available to drive along.  In most households that means one member can’t drive to work.  Historically, the city grew largely to serve the Naval dockyards.  These were built at a time when an employer would never have considered the need to provide car parking for his workforce, and much of the central city is a conservation area.  The dockyards in particular, like others around the country, were notable for cycle commuting.  I recall as a child watching the dockyard disgorge literally thousands of workers at the end of the day, all furiously pedalling their Raleighs homeward.


Even today, while perhaps 10% or so overall cycle to work, car commuters are less numerous than elsewhere.  Looking at the Guardian’s census map you can see that, while unquestionably a lot more than cycling, the numbers driving themselves to work are generally lower than average, especially in the south and west of the city, and the numbers being driven as passengers, while still miserably low, are rather higher than average, suggesting more car sharing.  Those walking to work, especially in the south-west of the city, are considerably higher than the national average.


Policy-wise, Portsmouth is doing a lot which is good.  It now has a signed 20 mph limit across all streets apart from A and B routes, with many streets having traffic calming as well.  On the faster roads, the traffic lights seem to be phased so as to discourage traffic from moving at the permitted maximum, and Portsmouth drivers seem to have taken on board the message that it is better to adapt your speed to the rhythm of the lights than to drag-race from one red light to the next.  Many of the residential streets are one-way, but quite a few – nowhere enough in my view – permit cycle contraflow. The city publishes a Cycling/walking map, showing recommended routes on quet roads and off-road paths, but sadly the signage on the ground doesn't live up to the promise of the map.


Specific cycle infrastructure can best be described as of fair-to-mediocre quality.  For typical UK cycle facilities that is praise indeed.