The picture below, taken this morning with my Blackberry in a mizzle so apologies for the gloominess of the image, shows how the opening of Stonecutter Street to Farringdon Street now looks following the advertised works to close the rat-run. 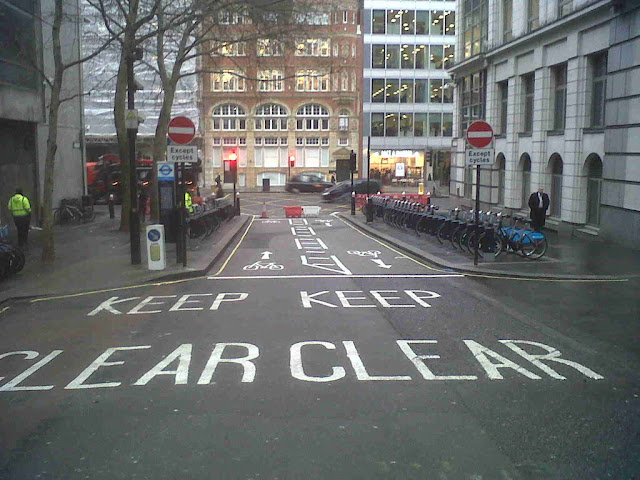 It is better than I had expected, in that I had assumed they would copy what they did in the adjacent St Bride Street, ie build up the footway and instal drop kerbs for cyclists to ride over.  Cyclists would then have to take their chances getting across the road to take Farringdon St southbound, just as they now have to do between St Brides St and the Evans cycle shop opposite.


But no, it appears that the single-lane road has been left in place as a two-lane cycle track, with traffic lights still functioning to provide a green phase for cyclists emerging in both directions.


I have asked the City whether they intend to install some of those nice black bollards with a white stripe and red stars, which have grown like mushrooms all over the city in recent years, between the two cycle lanes – for example, at the junction where you can currently see a traffic cone and a couple of plastic road dividers - and they have confirmed that they will be installing a "suitable array".


This would  provide physical as well as legal restraint on any cheeky drivers who decide to ignore the “No entry except cyclists” signs and drive through anyway, especially as the absence of buses and trucks coming down could encourage bad boys to turn in off Farringdon Street and avoid the lengthy detour which they must currently make to access Shoe Lane from south of Fleet Street.

You will see that the works have included an expansion of the hire bike docking station here, with what looks like the same number of docks installed on the right had side of picture as were already there on the left hand side.  Mind you, there is never any shortage of bikes here as Serco uses the wide pavement, just out of shot to the left, as its depot for distributing bikes to empty docks around the area – you can see a couple of their guys in high-vis jackets to left of frame.
Somehow I suspect that once Goldman Sachs has built its new headquarters on the site to left of shot, the reservoir of spare bikes will disappear!