Infamy, infamy, they've all got in for me! 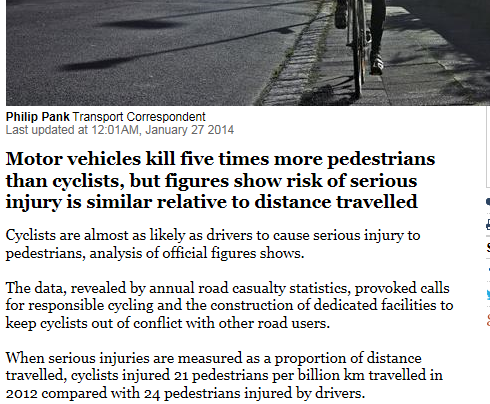 True, the impression conveyed by these opening paragraphs is not borne out by the remainder of the article, where more statistics are referred to, but that first paragraph is not merely misleading, it is mendacious.  Poor old Kaya Burgess, by all accounts a good man and a friend to cyclists, really got it in the neck on the Twittersphere yesterday although he neither wrote the offending piece, nor had any influence in the editorial decision to run it.  That seems unfair, (although I guess no more unfair than the abuse many platform attendants and ticket inspectors get from rail passengers over the SNAFUs generated by the incompetence or greediness, or both, of their privatised rail company bosses. )


It says “motor vehicles kill five times more pedestrians than cyclists”.  Firstly, to be pedantic, it is drivers of motor vehicles who kill pedestrians:  to quote the NRA mantra from the USA “guns don’t kill people, people kill people”.  Here the wording depersonalises the offences of motorists but leaves cyclists, as people, fully open to personal opprobrium.  More importantly, to be truthful the statement should read “motor vehicles kill one hundred and forty four times more pedestrians than cyclists” (because the ratio revealed further down the article is 145:1).


The claim actually made is based on a per-mile basis of comparison:


Note that this comparison is for a single year.  I have no idea whether the comparison would be more or less favourable to cyclists if, like the other stats the Times quotes, they had compared over the decade to 2012.  In any case, while it is obvious that motorists cover far more distance per annum than cyclists, and it is arguably reasonable to factor distance into the equation, in my view the comparison here is false.  The distance numbers exclude, for both cyclists and motorists, roads which are not “urban non-motorway”


Up to a point, that is a reasonable exclusion.  Neither cyclists nor pedestrians are permitted on motorways, and neither is likely to be seen in any significant numbers on non-urban trunk routes.  In fact the same is true of non-urban routes generally, as the distance penalty against pedestrians and cyclists is far greater and - counter-intuitive as it might seem - rural roads are far more dangerous for cyclists and pedestrians than urban streets.


But it goes further.  Quite significant stretches of urban non-motorway will also present almost negligible numbers of pedestrians and cyclists.  Have you ever seen a pedestrian or cyclist on, for example, the A3 between Tolworth and Wandsworth West Hill?  Or on the North Circular Road?  The urban A1?  The A2?  The Westway?  These are all urban and they are none of them motorway.


And then what about central London roads such as Upper and Lower Thames Street?  These roads have far greater traffic densities, ie vehicle-kilometres/day per road kilometre, than most of the roads where cyclists and pedestrians are likely to be sighted.  If you were able to make a comparison of the KSIs per vehicle kilometre travelled on roads where cyclists and/or pedestrians are actually found, rather than on all urban non-motorway, I am absolutely sure the ratios would diverge significantly.


Furthermore, The Times states that for each vehicle mile the casualty toll (killed or seriously injured) from motorists and cyclists are broadly similar, but  in the spirit of the famous Mark Twain quote that there are three kinds of lie:  lies, damned lies and statistics, as road.cc observes, you could measure the casualties by reference to the distances travelled not by the vehicles, but by the pedestrians themselves.  On that measure for every kilometre walked by a pedestrian, he or she is sixty times as likely to be killed or seriously injured by a motorist as by a cyclist.


Finally, less of a numerical comparison:  what exactly does “seriously injured” mean?  As I understand it, all cases referred for hospital treatment are classified as seriously injured, but that covers an enormous range.  At one extreme it could mean life-changing brain damage, spinal damage leading to paraplegia or worse, or loss of one or more limbs.  At the other, it could mean a few stitches, or a broken wrist – not to be dismissed, but recoverable.  I have no information on this – I don’t even know whether any is actually compiled – but I would wager that most injuries incurred in a cyclist-pedestrian incident fall at the “best” end of the range, while contact with a 1.5 tonne metal box travelling at 30mph or more leads to a significant number of injuries at the worst end of the range.


So, why does a responsible, quality newspaper write this mendacious crap?   What point are they trying to make?  If it was somehow meant to be supportive of cyclists or pedestrians, when you read most of the on-line reader comments, do you think they were successful?  No?  Or are they descending to the Daily Mail "sidebar of shame" clickbait to provoke outrage and generate on-line advertising revenues?
Posted by Paul M at 08:41