I have to smile

I was prompted to write this post by something I tweeted on Twitter a couple of days ago, which has generated far more responses, retweets and favourites than anything I have previously tweeted. 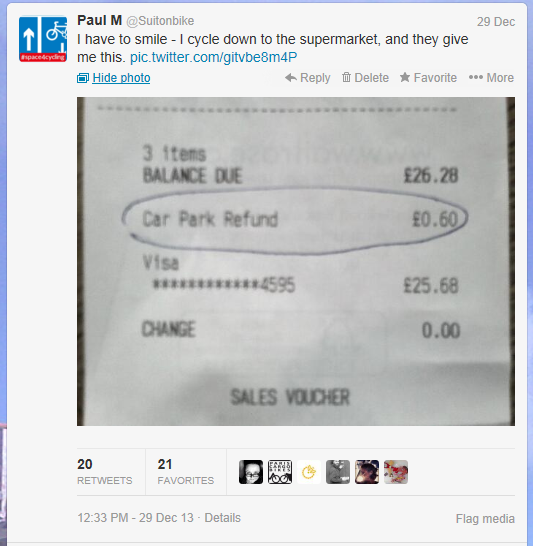 ﻿
Clearly it struck a chord – or hit a nerve, depending on your point of view.
By way of background, I live in the area administered by Waverley Borough Council, a semi-rural location tucked into the south west corner of Surrey, bordering West Sussex and Hampshire, largely overlapping the parliamentary constituency of our Health Secretary Jeremy Hunt.  It comprises several villages and four small towns:  Cranleigh, Farnham, Godalming and Haslemere.  It is prosperous, having not so long ago won the accolade of the borough with the best quality of life in the whole of the UK, and having, at the last census, 87% of households having the use of at least one car. *
Just as a convenient index of poverty and deprivation in a community can be made from the proportion of children eligible for free school meals, for affluence you could have the “Waitrose Index”, and on that index Waverley scores highly with a near maximum score of 3 – only one of the four small towns does not have a Waitrose branch.
Two of the three branches do not have their own car parks, relying instead on adjacent Borough car parks, for which a charge is made – 80p for the first hour and £1 for each subsequent hour.  (Not, in my view, a sum which would genuinely motivate a typical local Range Rover driver to travel to BlueWater).  So, to attract business, Waitrose offers a refund of 60p against the counterfoil on customers’ car park tickets when produced at the till, where the total exceeds £10.
I don’t deal with the household’s main weekly shopping needs – that falls to Mrs M – but I typically go down of a weekend for a top-up of things like milk, fresh fruit and veg, and quite often a Sunday roast.  For convenience I use the self-scanners.  The system can’t verify your car park ticket stub to authorise the refund but is clearly configured to assume that you must have one, so as I almost invariably spend more than £10 on a visit (hard not to, in Waitrose, even with only a bicycle basket) I get the refund automatically.
Personally I think that is sending the wrong signal to customers, but it is probably a sensible commercial decision for Waitrose to take in such a car-dependent area, and here’s the thing:  those car parks get very crowded indeed at peak times.  Sometimes you can watch the bankers’ wives in their Range Rovers, roving the car parks ready to pounce on the first  space to come free – and to exercise pretty sharp elbows when two 4x4s converge on the same space at the same time.  Would it  not make commercial sense to incentivise customers who have arrived on foot or bicycle, to ease the pressure on the car parks and so make more spaces for more customers?  Should they not extend the car park refund without conditions, or even go a step further and offer a larger discount to people who can show they have not driven to the store?  The third store (Godalming) having its own free parking does not offer this refund, so couldn’t something which is not offered at all to drivers be offered there to non-drivers?
Of course, proving it might be tricky, as negatives are always harder to prove, but perhaps if they provided a rack of cycle locking points, ready fitted with locks and keys?  A bit like the lockers in gym changing rooms, where you take the key with you on a wristband after you’ve locked up your outdoor stuff but the key can’t be removed from the lock unless it is locked closed.  Or the facilities for storing your skis at the bottom of a ski lift in a typical alpine resort?  You would then simply produce the key at the till for your rebate.
Come on Waitrose (and Sainsburys, Tesco, Asda and Morrisons) - what's stopping you?
* It is also a fantastic area for off-road cycling, with conditions to satisfy and challenge almost all skill levels.  Do come and try it out.  Or if you are roadie, try the “Little Lumpy” sportive at the end of May.
Posted by Paul M at 02:25