Cherque Farm is probably the newest large-scale housing development in the boroughs of Gosport and Fareham. The last of its 1,050 homes were completed in 2008.
Having been brought up from the age of 5 in Lee on Solent, I remember as a child playing in the fields of Cherque Farm when it really was a farm – cereals mainly – and I have seen how it has changed, firstly into a large gravel extraction scheme and finally into a housing estate.  Its eventual sale for housing was fiercely resisted at the time by local residents who, while perhaps reasonably labelled Nimbies, did have some legitimate concerns about the burdens large housing developments would place on local infrastructure, notably the sewage network and the roads, and the lack of any local strategy to create the jobs for the people who would live there, especially in an era of declining Naval employment in the borough.
At 100 acres the density is over 10 homes per acre – quite a high density for detached and semi-detached dwellings in a fully suburban setting.
And happily, perhaps in response to the local concerns about transport links, the estate does seem to have been planned to be less car-dependent than most housing estates built in the previous couple of decades.  Below is a snapshot from Gosport Borough Council’s cycle route map: 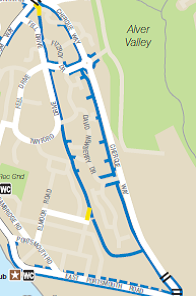 The roads have been designed purely for access to resident’s homes.  It is not entirely obvious from the plan, but the roads which pass through the centre of the estate pass out to the wider road network in only four places.  There is no end-to-end through route, and only one side-to-side, near the northern end.   There are few straight stretches of any length, and those have speed cushions.  The estate is encircled by a belt of cycle paths (shared use with pedestrians) with multiple access points to individual streets and closes, providing a high level of filtered permeability.  On this plan these are represented by the solid blue lines and by the two short yellow lines which represent former roads which have since been choked off.  In fact, there are more cycle access points than are shown on this plan – virtually every cul-de-sac is open to foot and bike.  ↓


Shown here the entry from the route parallel to Cherque Way↓


a section of the path passing around the south

and about half way along the south-west side.

The residential streets to the west, leading into the centre of Lee on Solent, have no specific cycle provision and are not explicitly traffic-calmed but they offer no real advantage as rat-runs and so are generally used only for access.  The busier distributor roads around it, leading to the north and to the south east, are tracked by separated shared-use paths.  How useful, or not, this wider network is can wait for another post.

This of course is a virtually brand-new development.  Most of the housing stock in the borough is much older - mainly post-war, but part of a housing boom which fell largely in the '60s and '70s.  At that time of course housing estates were very much being built around the private car, although the assumption then would have been that there would be only one car per household.  Separate cycle paths would not have been laid, even where there is more than ample space, and street geometry would have favoured rapid movement of cars with minimal need to slow or stop, as evidenced below in this shot from the Bridgemary estate, location of one of the borough's most popular secondary schools.

The view above is looking down part of the cycle route from Lee on Solent to this school, and the route turns at this junction to the left of the picture.  The off-road path ends at the junction straight ahead, and cyclists are supposed to rejoin the road here - although staying on the footpath to the right is a major temptation - but the volume and speed of traffic in this area is managed by some permeability measures, notably the banned right turn onto the main road ahead.  All the same, the streets in this area almost invariably have ample space for an off-road cycle path, albeit shared, but few of them do.  The result, as can be seen below, is predictable.