Update:  I have heard from @forestcyclist that the Department for Transport has refused permission to the NFNPA to use £1.5m of the Cycling Ambition grant on a road-widening scheme and on a private woodland park which is situated four miles outside the forest and would thus aim to reduce cycling in the National park itself, in direct contradiction to the purposes of the grant.  This £1.5m must now be returned (possibly that means it will not be handed over, as I assume the DfT only dishes out the cash against milestone reports on the progress of the projects)

This represents a partial victory for cycle campaigners.  I say "partial" because the total grant was £3.2m and so only half is being recovered.  It seems £1.2m has already been spent and the DfT has approved schemes not yet implemented totalling £500k.  It also rather appears that the money already spent has not been spent to the benefit of cyclists:  refurbishing public lavatories and resurfacing gravel car parks in the forest, on the grounds that cyclists occasionally take a leak and some of them bring their bikes on racks on their cars.  Last time I checked, most cars driving to the forest did not carry bikes, and bladder capacity issues surely afflict all humans of all ages, whether they cycle or not?  Or does all that coffee and cake make them unusually susceptible?

What is a victory in my mind however is that individual campaigners, notably NewForestCyclist and CycleNewForest, aided by like minded individuals (myself included) who have written to the DfT, our MPs, the National Audit Office, the local newspaper etc, have put a stop to an egregious misuse of public funds.

The roles of cycling bodies such as Sustrans and CTC in this is not entirely clear.  The NFNPA gave clear indications that they had "consulted" with these bodies and that they had approved the Rhinefield scheme.  Sustrans and CTC however deny being formally consulted so it is possible that someone from the NFNPA approached a couple of local cycle forum members known to belong to these bodies, got them drunk and tricked them into saying something supportive.

This does not mean that Sustrans and CTC do not have "form" in this area.  They agreed to the expenditure of some £300,000 of Cycle Safety Fund money  on the Bedford "turbo-roundabout" scheme, which was from the very start intended only to reduce collisions between motor vehicles arising from high volumes of traffic entering the roundabout at high speeds.  Cyclists are not supposed to use the roundabout itself - they have been offered shared use of existing footpaths around the perimeter!

What is, in my mind, a victory, is that we have apparently prevented such misuse of funds.  The £1.5m can now be released to be re-applied to another national park (South Downs seems to spend the money more wisely) or to a city scheme.  That is second-best to the schemes intended for the New Forest, but that first choice seems now to be off the table.

Third best, in my mind, would be simply to hand the money back to the Exchequer.  As a taxpayer (like virtually all cyclists, most of whom are probably above-average taxpayers) I would certainly prefer the money not to be spent at all than spent badly, or it could be spent on the NHS or schools instead.

NFNPA was one of about half the NPAs in the country to be successful in applying for a grant, in their case to implement a short-term cycle hire scheme similar to that seen in London and nicknamed “Boris Bikes”.  Under the scheme, bikes could be hired from docking stations around the railway stations in the south east of the forest or in nearby villages or other points of interest, and returned to any of the docking stations where space was available – just like in London.  A contractor had been found to operate the scheme and all was set fair to get started and spend the grant.

Suddenly, in August this year, NFNPA reversed this decision, and abandoned the proposed scheme.  The reversal is explained in a report* here by NFNPA officers to the authority members as being largely because “A Major anti-cycling sentiment has come to the fore in the wake of large-scale cycle sportive events”.

They have now put forward alternative ways to spend the grant money, known locally as “Plan B”.  This Plan was approved at a meeting of the NFNPA on 25th September, at which the plan was discussed under the agenda item “Any other items the chairman decides are urgent”.

Plan B envisages a number of alternative uses of the grant money.*  Some would be spent on changing loose gravel surfaces for some forest tracks to compacted gravel surfaces.  The two biggest expenditures however would be £1.275m to upgrade the surfacing at the edges of a road called Rhinefield Road/Rhinefield Ornamental Drive, and £300k for improvements to off-road cycle tracks within the Moors Valley Country Park and Forest – a privately owned (by the Forestry Commission) and operated leisure facility some four miles outside the boundary of the National Park.

I won’t go into detail about the conditions attaching to applications for Cycling Ambition Grants, suffice to say that they are intended to fund proposals to promote cycling as a means of transport within National Parks. The Moors Valley scheme is (a) outside the park and (b) not a transport scheme – it is pure leisure.

Rhinefield Road and the Ornamental Drive are not cycle paths.  They are roads.  For cars. They are also, by and large, little wider than single-track roads with a rough verge outside an uneven boundary line.  When two vehicles meet on these roads, they need to pull over, partly onto the verge, and slow down to let each other pass.  Upgrading these margins amounts to a road widening scheme which will permit vehicles to pass each other without, or with less, such pulling over/slowing down.  The NFNPA has presented this upgrading scheme as being of benefit for cyclists at the same time as it has revealed that its estimates of daily traffic is 139 cyclists and 1,562 cars. (see page 5)* Again, it is hard to square this with the stated objectives of the grant funding, to benefit cyclists and cycling in the National Parks – this apparently all the more so since by unhappy co-incidence a cyclist was seriously injured at almost the same time, by a passing car towing a caravan, whose driver may not have been aware of what (s)he had done, on the very road which the NFNPA wants to resurface “to benefit cyclists”.

All of this is by now old ground, chewed over by other tweeters and bloggers, notably @cyclenewforest and @forestcyclist, here.  What I want to explore is the stated reasons for abandoning “Plan A”, the cycle hire scheme.

The “Task & Finish Group” report referred to above talks about a “major anti-cycling sentiment”, but what is the evidence for this?  No evidence is provided in any public document made available on the NFNPA website.  There is a report on a public consultation (more below) but either the “evidence” is not that, or at any rate it has been wilfully and perversely misinterpreted.  All I can assume is that NFNPA members are expressing their own personal hostility to the scheme as representative of local residents’ feeling (a bit like Eamonn de Valera is reputed to have said that to know what the Irish people wanted he only had to look into his own heart - this from an American citizen who was, as they say in Dublin, “Oirish with a capital O” ) or they have had their ears bent at the bar in the Golf Club or the Conservative Club by those privileged few like minded individuals who have their ear.  Precisely the kind of back-door briefing which Michael Liebriech deplores in relation to the proposed London Superhighways.

So, what evidence, recorded in a scientific way and reported on officially by the officers of the NFNPA, do we have to support the claimed views of local residents?  Well, it is in this report here.*

NFNPA officers report that they sought the views of local communities, through various means including an on-line survey, leaflets, drop-in sessions and attendance at the New Forest Show.  It cannot be definitively said that the responses were representative – at least some of them were self-selecting through completing the online survey or sending in written questionnaire answers, and there doesn’t appear to have been much in the way of demographic information captured to normalise to the overall New Forest demographic, as would have been the case in a typical Gallup opinion poll.  However, nothing any more representative has been cited, by the officers, members or indeed anyone else.

They report that they received 139 responses.  It could be argued that this is not many respondents, but the small number does not itself make it unrepresentative – a typical Gallup or Populus opinion poll of voting intentions across the entire UK would have a sample of 1,000 respondents, in an electorate exceeding 40 million.  An even smaller sample size than we have here.  It is still representative, you just have to allow for a wider margin of error – still only a few percentage points though.

Their conclusion is as follows:

They talk of “least support” in the area closest to the location of the scheme.  Nowhere do they state or even imply hostility, or a balance of opposition overall.  Indeed they talk in positive terms of who the scheme is considered by respondents to be “most useful” to.

Drilling further into the data, first up is the views of Lyndhurst/Brockenhurst residents (ie closest to the scheme) then other Forest residents, as to who the scheme would be most useful to, among residents, businesses, and visitors. 1 indicates strongly disagree and 5 strongly agree. 2 and 4 are mildly, and 3 is neutral. 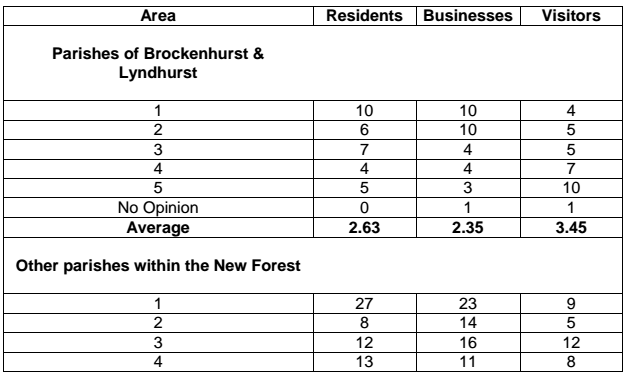 It can be seen that residents of the immediate scheme area by and large did not think that the scheme would be useful to themselves, or to businesses but they clearly considered that they would be useful to visitors.  Other Forest residents were somewhat more evenly divided as to whether they saw benefit to themselves or local businesses, but again it is abundantly clear that they saw benefits to visitors.  Visitors, unsurprisingly, saw great benefit to themselves, and to some extent to local businesses:  they were clearly not asked about residents.

Next, whether respondents were against, or in favour, of the scheme.  Again, 1 indicates strongly against and 5 strongly in favour.  2 and 4 are mildly, 3 is neutral. 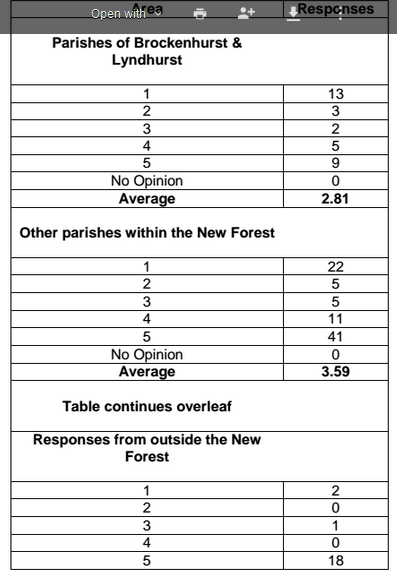